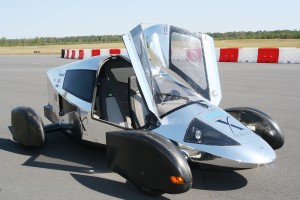 The VLC (Very Light Car), a product of Edison2, a Lynchburg, Va.-based company, sits on the test track at the North Carolina Center for Automotive Research near Garysburg. The company won a prestigious national award for producing a gasoline-powered vehicle capable of operating at 100 miles per gallon of gas. Staff Photo by Amanda VanDerBroek

GARYSBURG—Oliver Kuttner hopes to transform the American automotive industry and a part of that process will take place here at the North Carolina Center for Automotive Research.

With just its first phase completed, NCCAR has already hosted various automotive events and clients. Recently one of NCCAR’s first clients to use the two-mile track earned a prestigious award.

“This is what this place is all about,” said NCCAR Chief Operating Officer Simon Cobb.

On Thursday, Cobb along with Northampton County Economic Development Director Gary Brown met up with Kuttner, chief executive officer of Edison2, a Lynchburg, Va.-based company that has created a super-efficient vehicle called the VLC (Very Light Car). Kuttner was joined by Edison2 Director of Research and Development Brad Jaeger and Mechanic Bobby Mouzayck.

Edison2 was one of the first to have a test program on the NCCAR track which was held while the first-phase of the facility was still under construction.

“It’s perhaps one of the best facilities in the United States of America,” Kuttner said about NCCAR. “It’s a very flat and repeatable facility. What you get with a facility like this is jobs like we have; high skill level jobs.”

The VLC proto-type garners more than 100 miles per gallon and recently earned Edison2 the $5 million Progressive Automotive X PRIZE for the mainstream class, one of three classes in the competition.

He described the X PRIZE event as the ultimate science contest that fosters innovations for the good of mankind. The mainstream class requires a car to have four wheels, seat four passengers and demonstrate a 200 mile range. The vehicle must also exceed 100 mpg. The VLC came in at 102.5 mpg and was the vehicle with lowest emissions in the event. The competition included 136 vehicles from 111 teams hailing from all over the world.

The VLC runs with an internal combustion one cylinder engine fueled by E85 gasoline, an ethanol/gasoline mix, which is becoming popular in the U.S. due to the corn production in the Midwest.

Kuttner said the VLC requires the same parts as a regular vehicle, only on a different scale.

The efficiency of the car is due to its lightweight design that reduces drag. The VLC weighs less than 800 pounds and can be pushed at the touch of a hand.

While Edison2’s initial goal was to create an electric vehicle, Kuttner said that changed when his team realized that electric vehicles were not the only answer. Edison2 is made up of employees with diverse backgrounds, including engineering, design and racing.

The Edison2 team’s plans for the vehicle go well beyond the X PRIZE. Kuttner said the goal is for Edison2 to become a large company and to have the VLC mass produced.

“I’m from a textile (working) family and I’ve witnessed jobs go away,” he said.

Kuttner said the completely American-made VLC presents a prospect for the country.

“It’s an opportunity to put us back into the automotive industry as before,” he said.

Kuttner noted the VLC is still years away from becoming mass produced and work to develop the car from a proto-type to a product still needs to be done.

The North Carolina Department of Transportation is planning to upgrade a 7.1 mile stretch of US 13/158 in Gates and... read more