Ridgecroft School tennis has improved to 7-2 on the season after winning two of their last three outings. 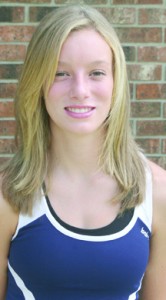 Ridgecroft second-seed Alex Riddick won the toughest match of the day when she rallied from a 5-3 deficit to edge Bailey Nelson 7-5 in the first set and then took a 6-2 win in the second.

“Alex did a good job of battling back and winning five straight games to win the set,” Ridgecroft Head Coach Elton Winslow said. “Roxie was also impressive in her hard-fought match with Brittany Lancaster.”

The most comfortable win for the Lady Rams was at number four where Miller Bryant cruised to a 6-0, 6-0 win over Sarah Lancaster. Third-seeded Katie Futrell also rolled to a 6-2, 6-1 victory over Lawrence’s McCaul Nelson.

In doubles action, Ridgecroft claimed a clean sweep with the top-seeded team of Bowman and Riddick defeating Corbett and B. Nelson 8-4 while second-seeded Futrell and Bryant claimed an 8-2 win over M. Nelson and Cowand.

The final matchup saw Daniels and Bracy defeat Lancaster and Byrum, also by an 8-2 count.

Bowman defeated Heaven Rushing 8-1 at the number one spot while Futrell beat Teirra Walton by the same count at number three.

Daniels secured a victory, 8-3, over Tiffany Riddick at the number five spot.

In the number four matchup, Bryant won by forfeit.

In doubles action, Bowman and Riddick defeated Rushing and Freeman 8-1 while Futrell and Bryant topped Walton and Riddick 8-2. Third-seeded Daniels and Quattlebaum knocked off Arellano and Erica Mooring 8-0.

The only loss the Lady Rams have suffered came last Wednesday when they were edged 5-4 by Greenfield School.

“It was a really hard-fought match,” Winslow said. “In singles, we played pro-sets due to the heat and still every match went more than one hour.”

The two teams were tied after singles’ competition, but Greenfield won two of the three doubles’ matches.

Bowman, Riddick and Bryant secured the wins for the Lady Rams in singles’ competition. Bowman, again playing at number one, defeated Cameron Blair 9-8 (7-3) while Riddick stopped Courtney Williams 8-2. Bryant won by a count of 9-8 (7-2) over Sawyer Parrish.

Greenfield’s Kenan Barnes defeated Futrell in the third-seed battle by a count of 8-3 and Lindsey Cox stopped Daniels 8-3 at number five. The final win for Greenfield came when Madison Tyson edged Quattlebaum 8-4.

In doubles action, Ridgecroft won the battle of the two seeds when Futrell and Bryant beat Cox and Parrish 8-1. Barnes and Tyson, however, defeated Daniels and Quattlebaum 8-0 to make the match a tie.

Blair and Williams, however, secured an 8-4 win over Bowman and Riddick to win the match for Greenfield.

After the three outings, Ridgecroft stands 7-2 overall heading into next Thursday’s contest with Gates County High School. That match, scheduled for 3:30 p.m., will be a home match for the Rams.