AULANDER – Wendy Allison Tayloe and Keith Allen Fox, both of Louisville, Kentucky, were united in marriage during a ceremony held at Connaritsa Baptist Church. 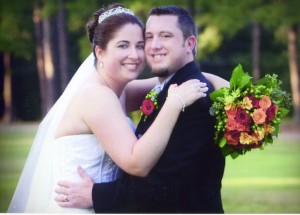 Wendy Allison Tayloe and Keith Allen Fox, both of Louisville, Kentucky, were united in marriage during a ceremony held at Connaritsa Baptist Church.

The bride is the daughter of Freddie and Ann Tayloe and the granddaughter of Fred and Marjorie Tayloe, all of Aulander. Her maternal grandparents are the late James H. and Ocie Dilday.

The groom is the son of Jerry and Sandra Fox of Louisville, KY.

Escorted by her father, the bride wore a strapless organza corset gown with beaded lace on the bodice, skirt and chapel train. In her hair she wore a tiara and a fingertip veil enhanced with crystals and scalloped edging. The bride carried a hand-wrapped bouquet consisting of Charlotte red roses, orange spray roses, peach hypericum berries, orange Asiatic lilies, and white stock selidago surrounded by cascading seeding eucalyptus with an undergarment of rich green salal leaves.

The paternal great-grandmother of the bride, Evelyn Alexander, left her wedding rings in trust to be given to the first great-granddaughter to marry. The bride wore them on her right hand.

The Matron of Honor was Robyn Cottier of Shepherdsville, KY. Bridesmaids were April Smithwick of Colerain and Emily Ruth of Indianapolis, IN. The flower girl was Kaelynn Fox, daughter of the groom.

The wedding was directed by Jeanette Tinkham and Gail Ambrose.

The pianist was Dr. Charles Hulin. Vocalists were Suzanne Newbern and Jim Wiggins.

Following the ceremony, a reception was held at Beechwood Country Club given by the bride’s parents.

The couple honeymooned in Gulf Shores, Alabama. They are making their home in Louisville, KY.

Bridal shower given by Robyn Cottier at her home.

Bridal shower given by the ladies of Connaritsa Baptist Church in the fellowship hall.

After rehearsal party hosted by the groom’s parents at the Heritage House in Windsor.