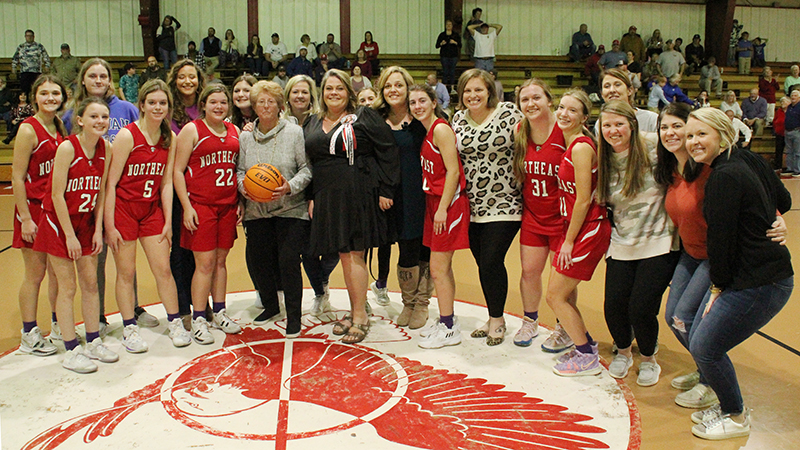 But what neither she nor her players realized at that precise moment was that another celebration – this one several decades in the making – was about to begin.

The win was the 500th in Brown’s coaching career at the varsity level, one that began in 1986 at the same school where she once was a standout student-athlete (Class of 1978).

“I didn’t have a clue as to how many wins or losses I’ve had….I don’t keep up with those types of things,” said Brown sitting in her coach’s office a short time later and trying to wrap her mind around such an accomplishment.

“Every member of every team along the way has made it all possible. It was their hard work, blood, sweat, and tears, that made it all possible,” she said in typical fashion, always downplaying her skills as a coach and instead shining the spotlight on those wearing the red-and-white jerseys of the school she l so dearly loves.

Reaching such a milestone is considered a lofty goal within athletics. However, doing so at a small private school located in an extremely rural county (population of just over 17,000) makes it a tougher mountain to climb. Counting Friday night’s victory, the Lady Eagles have seven wins so far this season. Last year’s team won 10 games and there hasn’t been a single NEA squad in recent memory with a roster of 10 players or more. The current team has seven players; the 2021-22 squad had just enough to fill the five starting spots.

Faced with a lack of depth, Brown’s teams make up for that with grit and determination. They didn’t shoot very well against Terra Ceia, but turned up the defensive pressure to keep them in the game. Still, they trailed by four (26-22) early in the fourth quarter before a pair of clutch baskets down the stretch by Leah McDermont plus baskets from Hayes Hatcher and Chloe Long and two free throws by Sarah Kate Ricks provided the Lady Eagles with the offense needed to allow their coach to secure career win #500.

“I really enjoy coaching in games like the one tonight,” Brown admitted. “That’s what keeps me going…making strategic moves in a game. I thrive in that environment. It’s a game of quick decisions.”

After graduating from Barton College, Brown’s coaching career at Northeast began in 1983 where she worked part-time and coached only the junior varsity girls.

“I don’t count wins or losses,” Brown said. “What I do is move forward and build upon what we did right during our last game and work to improve the things we did wrong.”

Friday’s post-game celebration included awarding the game ball to Brown as she stood at midcourt. There she was joined by her players, past and present.

“That was pretty neat; 500 or not, it was nice of some of my former players join in [the celebration],” Brown noted. “It’s always nice to visit with my former players. It’s special when we stay connected. I’m so proud of them…what they’ve become in life.”

“It’s been a great career here,” Brown said, “one that I wouldn’t trade for anything else in the world. Sure, the times have changed and the kids lifestyles have changed, but it’s still about teaching the importance of discipline and teamwork. Those are life skills worth learning, ones that will take you far in your chosen profession.”

In closing, Brown was asked how long would she take to enjoy the accolades that come with reaching the coaching milestone.

“Tonight (Friday), but I’ve got to start preparing this weekend for next week’s practice schedule and games,” she humbly answered.

Thus begins the quest for win #501…and beyond.