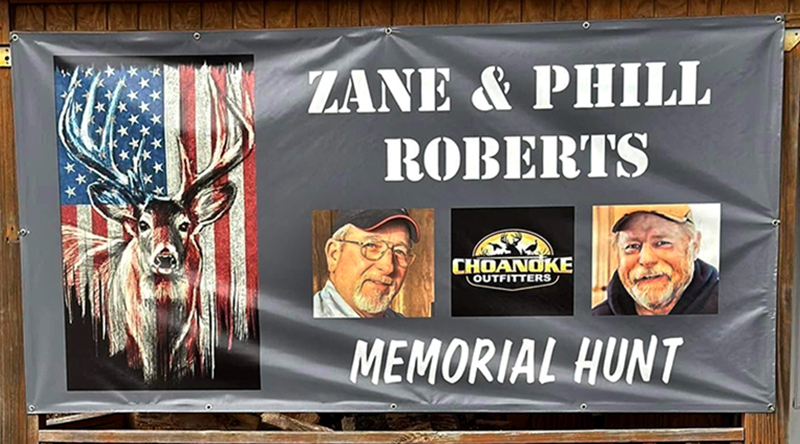 The event is held annually in memory of the late Zane and Phill Roberts. Contributed Photo

AHOSKIE – What started three years ago to honor the late Zane Roberts has grown into an event that attracts hunters from across the nation as well as locally.

Choanoke Outfitters, which offers deer and turkey hunts and lodging in Hertford and Halifax counties, decided several years ago to host an event in memory of Zane Roberts.

“He loved supporting the military and also first responders, so we thought what better way to honor him than to offer a hunt each year for military personnel and first responders,” said Zane’s son, Josh Roberts. “This past hunting season we lost my uncle Phill Roberts, and we decided to add him to honor his memory also.”

Josh Roberts said each year they place a post on the Choanoke Outfitters Facebook page, asking individuals to nominate any military member or first responders they feel is deserving for the hunt.

“From those nominations we select 10 random hunters,” said Roberts. “We have had participants from all over the United States, from Purple Heart recipients, to 911 dispatchers, volunteer firemen, deputies, and many active duty or veterans from all branches of the military.

“We hold a two-day hunt towards the end of the traditional deer hunting season where they enjoy our lodge and home cooked meals,” Roberts continued. “On the night of the second day we have a band, a cookout, and hold a brief presentation, just announcing them, their service and any accomplishments that may have come along their time serving our countries and our communities. We also give them large gift baskets, donated items, hunting gear, etc.”

Roberts noted that the event has grown since its inception.

“We hope to continue to do more each year,” he stated. “All items, monies donated, go towards the Memorial Hunt and to the winners. The Roberts family and Choanoke Outfitters family sincerely appreciate all those that have donated the past three years.” 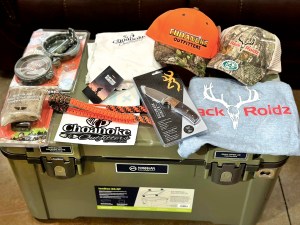 Military veterans and first responders chosen to participate in the Zane & Phill Roberts Memorial Hunt are given a wide array of hunting-related items. Contributed Photo

He said an American Flag, one that flew over the United States Capitol per the request of U.S. Senator Benjamin L. Cardin of Maryland, was presented this past hunting season to Choanoke Outfitters.

“This flag was flown on behalf of the Veterans and First Responders for your 3rd annual Zane and Phill Roberts Memorial Hunt. Thank you for all that you have done in support of the men and women in uniform,” Senator Cardin stated in a letter of authenticity that accompanied the flag.

“We are honored to do this for these hardworking men and women and we are humbled by their appreciation shown and the donations we have received to help us out with this event,” Roberts said.

To learn more about the Zane and Phill Roberts Memorial Hunt and how to donate to the next event, contact Josh Roberts at 252-395-0008.