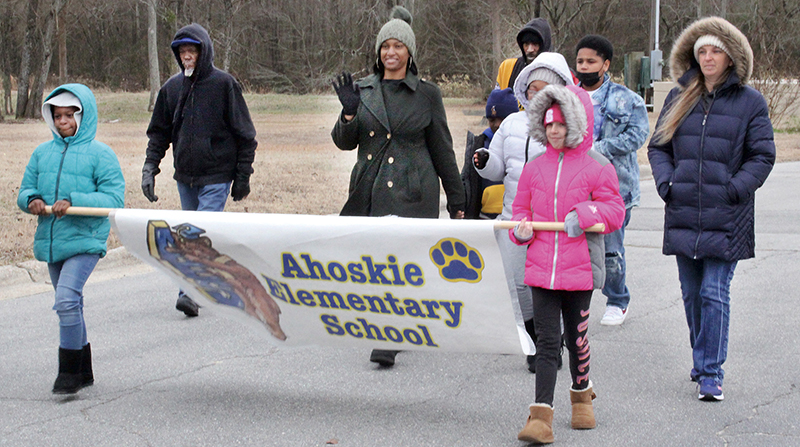 AHOSKIE – Even though his life was cut short from an assassin’s bullet 55 years ago, the impact of Rev. Dr. Martin Luther King Jr. still resonates today.

King’s vision of equality for all remains as a focal point for those celebrating his birthday, which is officially observed on the third Monday of January. Here in Ahoskie, a group of approximately 60 individuals gathered at the town’s amphitheater on a cold, blustery Saturday morning to celebrate Dr. King’s legacy by taking part in a Freedom and Equity March.

Dr. King’s sacrifices and his contributions to our society still lives on today,” said Ahoskie Mayor Weyling L. White. “I know it’s cold out here this morning, but your presence means a lot. You’re here because Dr. King’s fight still lives on. Although many battles have been won and we’ve come a long way, we still have far to go. The fight for equity in healthcare, in education, and many other sectors that affect our daily lives can still be seen.”

Rev. Dr. Jeffrey Wilson of Calvary Missionary Baptist Church gave the opening prayer, requesting of those gathered to “continue to be an example of what Dr. King stood for, and what we should be of Christians and believers in Jesus Christ.” 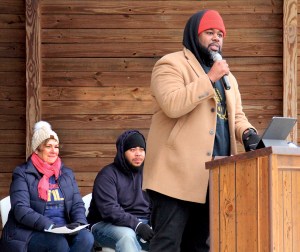 Ahoskie Mayor Weyling L. White (standing) was among those making remarks at Saturday’s event along with Kim Schwartz and David Hunt (both seated). Staff Photo by Cal Bryant

Andre Lassiter, chairman of the Hertford County Board of Commissioners, led off his remarks by remembering those of previous generations who “paved the path for us.”

“They stood on the hope of having a dream for generations such as mine as for those still to come,” Lassiter remarked. “They envisioned a dream that would see the first Black mayor of Ahoskie – Weyling White – the first Black Superior Court Judge – Cy Grant – the first Black Sheriff – Winfred Hardy – the first Black Clerk of Court – Shirley Johnson – and that I, a young Black male from Pine Street here in Ahoskie – would be called a County Commissioner.

“Let me say that the dream is still alive and well, but I would be remiss if I did not state that we owe it to our race not to be dream killers,” he continued. “Our young people are facing many troubles…they’re on drugs, they’re disrespectful to elders, they are out killing, stealing, and destroying themselves. We need to make a change in order to help our next generation.

“My challenge to you today is this, now that we’ve realized the dream, what are we going to do with it,” Lassiter asked rhetorically. “We need to grab a young person…mentor, educate and show them the way. God didn’t give us this dream to elevate ourselves, he gave it to us to help others. We have seen and lived the promise, now is the time to give something back so that we don’t lose the generation behind us.”

Roanoke-Chowan Community College President Dr. Murray J. Williams noted the importance of equality across the nation “as we remember the contributions of Dr. King and the impact he had on our lives.”

He emphasized education, and as the president of Roanoke-Chowan Community College I witness the impact that education has on lives every day,” Dr. Williams stated. “Education is the journey that takes a student to their next step. That next step impacts our community and our culture. Education is the great equalizer and is the means of how our community can go from good to great.”

Williams stressed that a person’s education focuses on individual enrichment, but what is done with it has a lasting ripple effect.

“When you read to your children or grandchildren; when you help them with their homework; when you talk about their goals, you are transmitting knowledge that directly influences culture and extends the legacy of Dr. Martin Luther King Jr.,” she said. “The connection between education and dream fulfillment lies within the campus walls of Roanoke-Chowan Community College. I challenge you here today to share your educational journey with others and contribute to our community.

“As we continue the path that Dr. King paved for us, let us never forget the overriding principles and philosophies he stood for. Let’s remember that he had a dream for peace, for brotherhood, for equality and for justice. His faith was strong and he never lost hope. Let us challenge ourselves to be worthy of Dr. King’s dream for us and to assure that his legacy continues to inspire greatness. Taking pride in education will leave our communities better and the lives of Hertford County citizens richer,” Dr. Williams concluded.

Without using notes, Natesha Stephenson gave a stirring rendition of Dr. King’s famous “I have a dream” speech that he first made 60 years ago (Aug. 28, 1963) in front of the Lincoln Memorial during the March on Washington, a civil rights rally that attracted a crowd of over 200,000. 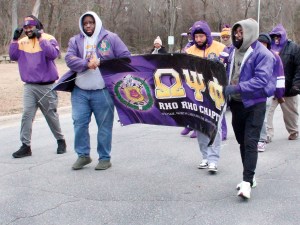 Kim Schwartz, CEO of Roanoke-Chowan Community Health Center, noted that community health centers across the nation trace their roots to the Civil Rights movement in an effort to overcome inequality and injustice in health care of long ago.

“That seed has grown right here in Ahoskie,” said Schwartz who referenced the 6,000 patients they saw in 2005 has now increased to over 16,000. “We give great care to everyone every day, regardless whether you can pay for it, or where you’re from, or who you are related to. It’s all about equality and service to others.”

While the Civil Rights movement did indeed bring about change, Schwartz said there’s another movement, this one right now, that begs for participation.

“I need you to move like you’ve never moved before to promote the expansion of Medicaid in North Carolina,” she stressed. “That expansion will ensure access to affordable health insurance coverage to more than 600,000 North Carolinians. It will increase access to healthcare by putting mental health and substance abuse services across the state, especially in rural communities.”

She gave a sad fact: 55 percent of adults seeking mental health and substance abuse help in 2019 could not afford to pay for those services.

She also stressed that Medicaid expansion will boost rural hospitals as well as creating jobs in rural communities.

“Our elected representatives need to hear from you. Voice your support of Medicaid expansion. Dr. King knew that people die because they had no resource for healthcare. That’s what Dr. King asked us to do…step up, and step out,” Schwartz concluded.

Rev. Dorian Daniels of New Ahoskie Baptist Church said when he thinks of Dr. King, three things come to mind – continue to educate about the truth of being a real American; continue to empower the next generation of leaders; and continue to elevate the spirit of unity.

Ahoskie Town Councilman David Hunt thanked all in attendance before directing them to the starting line for the Freedom and Equity March.