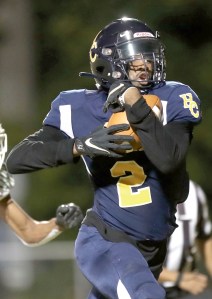 Powell, a senior wide receiver and defensive back, made the all-state team as a two-way player.

As a wide receiver, Powell posted impressive numbers during the 2022 season, one that saw the Bears advance to the third round of the state Class 2A playoffs. He totaled 45 receptions for 983 yards and 11 touchdowns. He added another touchdown on a punt return.

Defensively, Powell made 47 tackles. He also had nine interceptions (returning one for a touchdown), three pass break-ups and recovered two fumbles, one of which he returned for a touchdown.

The only other Roanoke-Chowan area player on HighSchoolOT’s all-state team as a two-way starter is Anthony Harding of Northampton County High School. He was an Honorable Mention selection.

There are some players who could go on the first team offense and second team defense. There are others whose overall value isn’t reflected by just one side of the ball. That’s why we have the two-way player category. There are five players per team, and triple that number, 15, on the honorable mention team.

“We were intentional about not “demoting” a player for being good at two positions — in other words, we wouldn’t take a lock for first-team defense off that team only to move them to a second or third team in the two-way player category,” HighSchoolOT said in a statement. “Players on this team would have been moved laterally or up from where they would have placed on offense, defense, or special teams, but not down.

The HSOT All-State football team is comprehensive in a number of ways. First, it seeks out individual stats for each player and Hudl film for players (even for offensive linemen). Secondly, it seeks out input not only from its own staff and coaches but also media members across the state. Rather than tallying votes by ballot, HighSchoolOT maintains an open dialogue with these media members to ensure the best all-state team possible.