Passage of time does not heal heavy hearts 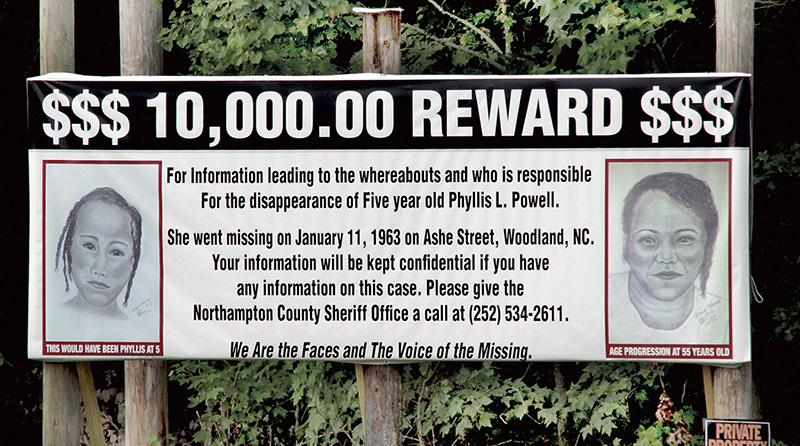 This is one of two billboards erected in July 2015 along US 258 in Northampton County. Both bear the message, and reward information, of a case involving a young Woodland girl who disappeared in 1963. File Photo / Cal Bryant

WOODLAND – Sixty years is a long time to deal with a heavy heart.

Today (Wednesday, Jan. 11, 2023) marks the 60th anniversary of the 1963 disappearance of Phyllis Lorrain Powell. The then five-year-old was playing outside of the family’s home on Ashe Street in Woodland when she vanished. 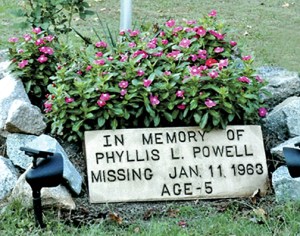 Members of the Powell-Vinson family gather on January 11 of each year at this memorial on Ashe Street in Woodland to remember the 1963 disappearance of Phyllis Lorrain Powell. Contributed Photo

Despite a massive search on the ground and in the air involving over 200 individuals, there were no clues discovered on the little girl’s whereabouts, other than a set of small footprints found in an area bordered by a thick woods about one mile from where she went missing.

Each Jan. 11, the Powell family gathers at a small memorial erected in Phyllis’s memory in Woodland. That day brings back painful memories.

“It’s a tough time for my family,” said William “Buddy” Powell, the brother of Phyllis, referencing the first few weeks of January. “We talk about the memories we have of Phyllis.

“While it still hurts not knowing what happened to her, I believe we would all find some peace if we just knew where her body is. We could give a proper burial. That would give us some sort of closure.”

Despite the agony suffered by the Powell-Vinson family for the past 60 years, they harbor no ill will towards the person or persons responsible for their loved one’s disappearance.

“We just want to know where she is…we’ve accepted the fact that she’s not alive,” Powell said.

He laid out the timeline of Jan. 11, 1963. It was around 12 noon that day when his sister, Joyce, was washing clothes at the home of a Woodland neighbor, Molly Lassiter. Phyllis was with Joyce and asked her older sibling for permission to go outside and play.

“Joyce knew it wouldn’t be a problem because of the area that Phyllis was going to play was surrounded by houses owned mostly by family and friends,” he said. “Little did Joyce or any of us know that within an hour Phyllis would be gone; she just vanished.

Buddy Powell added that there wasn’t much traffic on Ashe Street back in 1963, simply due to the fact there were only two men who lived on that street who owned an automobile. He added that those living on Ashe Street (known as Back Street at that particular time) were either related or very close friends.

“Most of the men who lived there would walk to work at the casket companies or the basket mill that operated back then in Woodland and George,” he recalled.

As a member of a family with a missing relative of their own, Brown also played a pivotal role in getting the DNA tests performed on Buddy Brown and his brother, Joseph. Those DNA samples were used to see if there was a genetic link to human bones discovered decades ago in the northwestern part of Northampton County. However, those tests did not reveal a DNA match.

Ten years ago, on the 50th anniversary of Phyllis’s disappearance, Diana Trepkov of Canada, a Certified Forensic Artist through the International Association for Identification, became involved in the case. Based upon recollections by the family (there were no known photos of young Phyllis), Trepkov penned a likeness of Powell at age 5 and then an age progression likeness at age 55. Those two drawings were used on flyers and billboards.