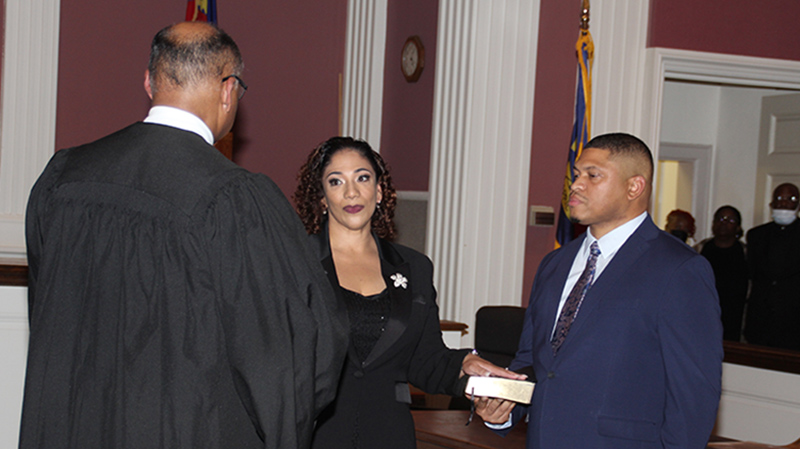 With her husband, Damien (right), holding the Bible, Kim Gourrier Scott accepts the oath of office on Jan. 1 as the District Attorney for the 7th Prosecutorial District from Resident Superior Court Judge Cy Grant. Staff Photo by Cal Bryant

JACKSON – A new year was ushered in here Sunday with a new leader for victims of crimes. 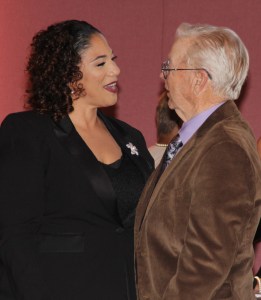 Kim Gourrier Scott of Murfreesboro was sworn in as the District Attorney for the 7th Prosecutorial District (Bertie, Halifax, Hertford, and Northampton counties). She replaces Valerie Asbell who retired last month after serving as District Attorney since 2000.

“I feel blessed, thankful, and fortunate that you all saw fit to be here today to share in this occasion,” said Scott just moments after taking the oath of office from Resident Superior Court Judge Cy Grant inside the main courtroom of the historic Northampton County Courthouse.

The newly elected DA stressed that she didn’t consider this new role in her career as a “must have” job.

“I believe this is what God placed in my spirit,” Scott remarked. “This is what I was tasked to do during this season of my life.”

After graduating from the Thomas M. Cooley Law School at Western Michigan University, the New Orleans native recalled the early days of her professional career when she worked for Legal Aid of North Carolina.

“I’m passionate about helping people,” Scott stressed. “Damien [husband] and I are raising three small children in Murfreesboro. We hear about the things on the news. I’m scared for my children. But it’s not just my children who I go to work for. We do what we do because no mother should be afraid to let their children play outside. No mother should be apprehensive about taking three steps away from the shopping cart in the grocery store because you don’t know what other people’s intentions are. So it was placed on my heart a long time ago to be present and to help people.”

As Scott looked around the standing-room only crowd in the courtroom, she said she saw “so many people who have helped me along the way, and I thank each one of you for that.”

She offered special thanks to her parents, her siblings, her husband, and her children.

“I’ve dedicated my last 17 years to helping people, and for at least the next four years I am your elected District Attorney and I promise to do the same thing,” Scott remarked. “People want to feel safe in their homes and they should know there will be people in the courtroom who will fight for them.” 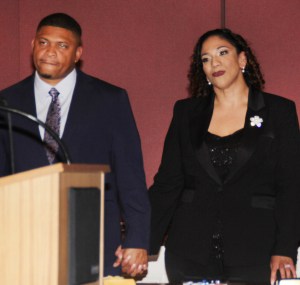 Kim and Damien Scott hold hands as the Jan. 1 ceremony comes to a close. Staff Photo by Cal Bryant

She thanked the members of her staff as well as the brave men and women of local law enforcement agencies. She also encouraged citizens of the district to partner with the DA’s office.

“Everything takes teamwork,” Scott said. “We are here for you.”

Madam DA elect has been learning, growing, and preparing for this day. She has had good leadership with madam DA Valerie Asbell. She is ready now to lead us,” Judge Branch said.

“Kim, as you know, being District Attorney allows you to change a person’s life at the stroke of your pen. That’s an unimaginable power to possess,” Asbell noted. “Being the District Attorney for so long has taught me a lot about resilience, character, humility, temperance, charity, and justice. Now, you are going to assume that awesome responsibility that I know that God has prepared you for.

“Remember that with great power comes great responsibility,” Asbell added. “You will have meaningful choices to make. There will be highs and lows, but God has placed you where He wants you to be for such a time as this. After years of trial and error, I have learned to pray and listen for God’s voice. Kim, pay attention to what’s around you and seek God’s direction and how He wants to use you in this public servant’s position.

“I want to say how proud I am of you, personally and professionally. May God continue to bless you, your family and your staff. I love you,” Asbell concluded.

Damien Scott said he saw early on of his wife’s passion of helping others.

“Kim is not from this area, but she’s been here for the last 15 years and has poured everything within her into this community,” he stressed. “She is passionate about her work and her desire to help others. She is up every day to speak for the voiceless. She has prepared herself for this community. She wants to represent you well, so she has put in the work. She takes her leadership to heart. On the clock or off the clock, she is prepared to help you.”

Mr. Scott said his wife is the “walking definition of humble.”

“When I asked Kim why aren’t you celebrating [her recent political victory as the next District Attorney], she said because there are still victims and at the end of the day there’s still too much work to be done. That’s who you have chosen to represent you in District 7,” he said, adding that his wife’s two driving forces in life are her family and her faith.

“She is an all-star mother,” Mr. Scott noted. “She pours everything in her into her children. She is an absolute wonderful wife and friend for the 12 years we’ve been together. For that, I’m thankful, I’m blessed, and I love her.”

He read special messages from their children, exclaiming how proud they are of their mother.

Prior to administering the oath of office to Kim Scott, Judge Grant offered special remarks.

“I have seen Mrs. Kim Scott develop into an outstanding prosecutor,” Judge Grant stated. “It’s been a pleasure for me to sit here as a judge and watch her do her job and perfect her craft. She’s passionate, she’s hard working, she has great trial skills, and, most importantly, she cares about people, especially victims of crime. Those of us who are residents of this district, and I am one of them, we are fortunate to have Kim Scott as our District Attorney. She will carry on the legacy of former District Attorney Valerie Asbell and former District Attorney David Beard.”

Iris Williams served as the Mistress of Ceremony. 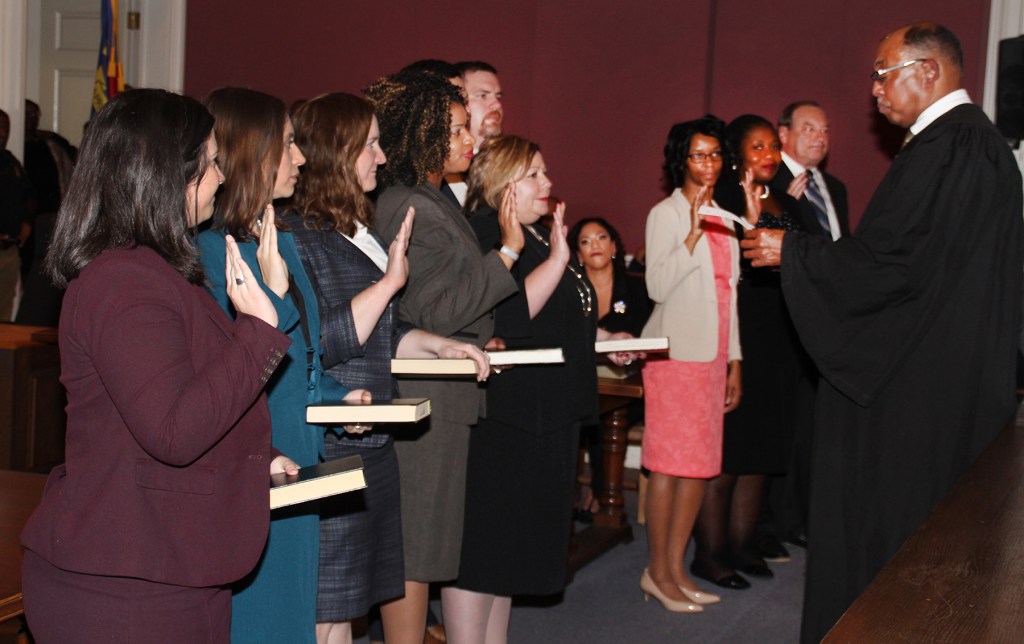