AHOSKIE – Dominance (noun) is described as power and influence over others.

As an example, see the effort of Jasmine Felton in the girl’s championship game of the 31st annual Roanoke-Chowan News-Herald Holiday Classic here Thursday night. 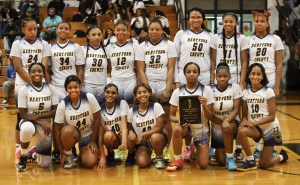 It came as no surprise that Felton, who also grabbed 18 rebounds, was named as the Tournament MVP.

Felton got off to a slow start, primarily due to being the target of a box-and-one defensive strategy by Hertford County. She scored only two points (on a pair of free throws) over the opening eight minutes of action where the Lady Eagles led 6-4.

Hertford County would forge two ties in the early stages of the second period: 8-8 thanks to a three-point play by Jaliyah Mitchell and 10-10 after a basket from Adarielle Townsell.

The Lady Bears were still in the hunt later in the second quarter as Sophia Howard sank a trio of free throws after being fouled on a three-point attempt with 4:15 left in the period. Nearly one minute later, Brooklyn White drilled a three-pointer from the right corner and HCHS only trailed by one (17-16).

But Felton dominated during the closing three minutes of the first half where the junior scored nine of the final 10 points to lead Northeastern to a 26-17 lead at intermission.

A basket each from Karae Alfred and Townsell allowed the Lady Bears to keep within striking distance as they trailed 30-21 two and one-half minutes into the third quarter. However, Hertford County wouldn’t score again until Tamia Britt rolled in a three-pointer that barely beat the buzzer to end the period. During that five-plus minute scoring drought by the Lady Bears, Felton proved as an unstoppable force as she scored 12 straight points, 10 of which came after she grabbed offensive rebounds. The net result was a 42-24 lead by Northeastern at the end of the period.

The Lady Eagles then reeled off 11 unanswered points over a five and one-half minute stretch of the fourth quarter to more than seal the win. Hertford County’s only points of the period came on a three-pointer by Britt and a single free throw from Gabrielle Joyner.

In addition to Felton’s MVP effort, three of her teammates – Azaria Gallop, Aniyah Rainey, and Sanai Alexander – were named to the All-Tournament Team.

White and Britt represented Hertford County on the All-Tournament Team.