Buffaloe to compete in qualifying event 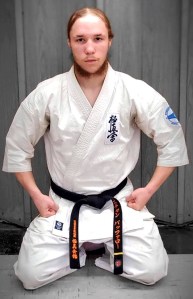 If Buffaloe wins or places in the top three, he will again qualify to compete in the “Kyokushin Karate World Open Championships” in Tokyo, Japan in November, 2023. This Karate Olympics is held once every four years and features only the best (top) 200 fighters in the world. Many Kyokushin fighters dream of competing on the world stage, but never achieve this opportunity.

Buffaloe is currently the reigning champion of this annual Kyokushin Karate tournament in Little Tokyo, having won in 2020. This is the first time in three years that this event will be held due to the pandemic shutdowns.

Buffaloe is very appreciative and humbled by this great opportunity and plans to make the best of it.

He is training hard under his Trainer/Coach, Sensei Kenny Buffaloe, Instructor of the Kyokushin Karate Class in Murfreesboro, in order to make a good showing of himself on Feb. 5.