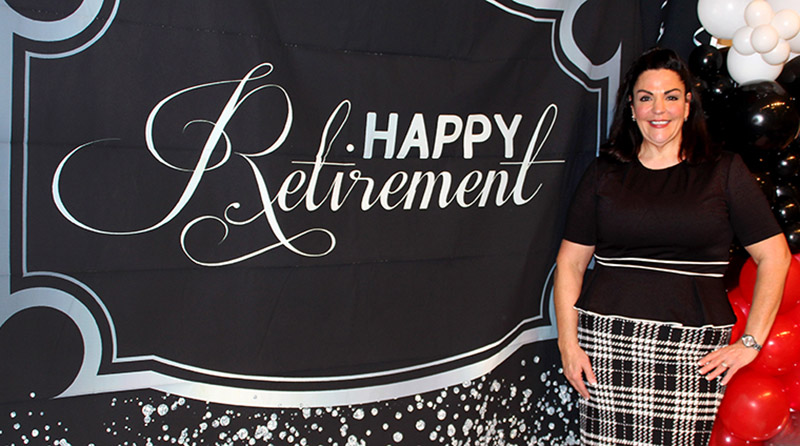 Valerie Asbell poses alongside a retirement banner that served as the backdrop of last week’s event in Jackson that honored the local District Attorney who will end her 30-year career on Dec. 31. Staff Photo by Cal Bryant

JACKSON – She’s been called many things over her adult life – from compassionate to tenacious and all points in between – but now she joins the ranks of being a retiree effective Dec. 31. 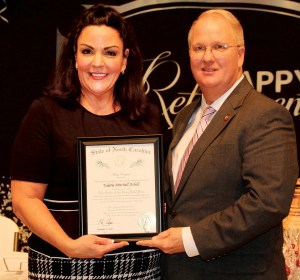 As part of the retirement banquet, Valerie Asbell was awarded the North Carolina Order of the Long Leaf Pine by State House Representative Michael Wray on behalf of Governor Roy Cooper. Staff Photo by Cal Bryant

Following a 30-year career, local District Attorney Valerie Mitchell Asbell is closing that chapter of her life. She was praised for that longevity as a public servant at a retirement celebration held Dec. 15 at the Northampton County Cultural and Wellness Center.

“I thank God,” Asbell said as she opened her remarks after listening to numerous individuals praise her work ethic and character. “[God] has graced my life with so many opportunities and blessings that I know are not of my hand or of any human hand. I have never wanted to be anything but a prosecutor and my dream has been fulfilled for nearly three decades. I find myself on this beautiful night the most fortunate, blessed woman.”

A native of Roxboro in Person County, Asbell graduated in 1992 from Tulane Law School in New Orleans. After passing the North Carolina Bar Exam, she was hired in 1993 as an Assistant District Attorney for what was then Judicial District 6B (Bertie, Hertford and Northampton counties). Seven years later – on her birthday (May 29, 2000), North Carolina Gov. Jim Hunt appointed Asbell as the first female District Attorney in District 6B, filling an unexpired term left vacant when then District Attorney David Beard retired. Since that time she successfully won election for four-year terms in 2002, 2006, 2010, 2014, and 2018.

“All of the kind words that have been spoken tonight fill my heart with joy and gratitude because I feel that God has allowed me to accomplish the goals and passions of service which God asked of me so many years ago,” Asbell said. “I served victims of crime with passion and the gift of advocacy that was given to me only by God.”

She offered thanks to those, past and present, who have stood steadfast in their support of her career, one full of triumph and tragedy. Asbell praised her family – husband Jimmy, son Ethan, and stepson Cole; her mother-in-law Betty Asbell; and godmother Janet Hatcher, along with other extended family members in attendance. She became emotional when talking about the support of her late mother and father, her late brother, late father-in-law, and two special friends and mentors who have passed on: Lisa Wheeler and John Tyler.

Asbell said she has the “most amazing work family in the entire State of North Carolina.”

“My work family and close friends know that I am a huge Star Wars fan,” Asbell noted. “These fierce professionals in my office are loyal Jedi warriors who fight everyday for the rights of victims.”

She also expressed appreciation for her “faith family” at Center Grove Baptist Church.

Asbell gave a special nod to her “ride or die” friend, Iris Williams, her longtime executive assistant who served as the Mistress of Ceremonies at last week’s retirement celebration. 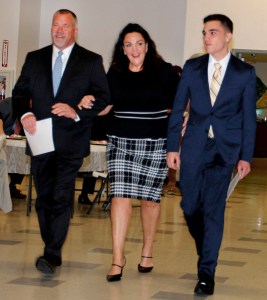 Valerie Asbell was ushered into the retirement banquet by her husband, Jimmy, and son, Ethan. Staff Photo by Cal Bryant

“I have had a lot of mentors and teachers along my 29 1/2 years,” Asbell said. “Judge [Cy] Grant was my superior court judge when I started in 1993 and I am so thankful for his advice and guidance throughout my career from Assistant DA to the District Attorney. There are two many other court officials to name but I can honestly say that I have had the benefit of working with some pretty amazing people from four counties for a lot of years and I have learned something from every single one.”

She also praised the law enforcement officers in the District.

“It has been an honor and privilege to work with you for the past 29 1/2 years,” Asbell said. “Every day, each one of you chooses to get up and put on a badge and put on a gun and go out and protect and serve us – your community – and I know that each one of you would lay down your life for mine every single day and I appreciate that more than any of you will ever know. You have a thankless job and I want you to know how thankful I am for your willingness to serve.”

She thanked her former boss (David Beard) for giving her the opportunity to pursue her dream.

“He taught me the skills in the courtroom and a lot of life skills outside of the courtroom,” Asbell stressed.

In closing, Asbell said she will miss fighting for victims in the courtroom.

“I am forever grateful for my career. Life could have taken me in so many different directions. But above all of the noise, I knew I wanted to serve and help people. Now as I stand here years after, I can say that I did the best I could to be a good person, a good wife, a good mother, a good prosecutor, a good boss, a good mentor, and I hope that is enough,” she concluded.

Prior to her remarks, Asbell was feted by those who admired her many skillsets.

Judge Grant said he didn’t know what to expect from Asbell when she replaced the retiring DA David Beard.

“She didn’t miss a beat,” Grant stressed. “She was always prepared, always hard working, and had great skills as a trial lawyer.”

Grant said he has conducted criminal trials in approximately 60 of the state’s 100 counties.

“Valerie’s office is probably one of the best, if not the best, prosecution offices in the state,” Judge Grant noted.

He cited one particular criminal case that he presided over, the PETA trial in Winton where two of its workers were charged with killing dogs/cats and discarding the bodies into commercial trash dumpsters in Ahoskie.

“It was the most publicized trials in Hertford County, it drew national attention, and Valerie had only been the DA for about three years at that time,” Grant recalled. “It was obvious that one of those high-powered defense attorneys thought he could come here to little Hertford County and walk all over this young, female DA. Well, Valerie didn’t back down. She tried a brilliant case and both defendants were found guilty.

“I’m going to miss you, Valerie. I thank you for serving your District well,” Grant concluded.

Hertford County Clerk of Court Shirley Johnson said Districts 6A and 6B are losing a living legend.

“[Valerie] represents our first-ever elected female District Attorney,” Johnson remarked. “Whenever her presence graced the courtroom, she got everybody’s attention. No matter how big or bad they were, they met their match when they met Valerie Asbell.”

“I’m not just here tonight because I’m the Clerk of Court, I’m here because Valerie Asbell is my friend,” Johnson continued. “She let me be me and I let her be her. We felt free to share our fears, our frustrations, and a whole lot of tears as women who were trying to meander our way through a system that didn’t understand us. We always valued each others attention.” 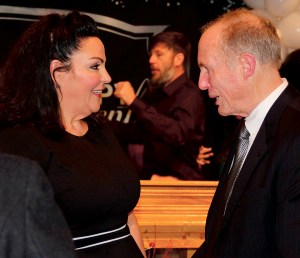 Retired SBI Agent Dwight Ransome said he had watched with pride as Asbell tried criminal cases during her time in the DA’s office.

“She protected the weak from the strong and the poor from the oppressor; you have finished this assignment,” he stressed. “Over the years you have been a true and loyal friend to me and my family. I’ve learned that money cannot buy respect, loyalty, and friendship. These three must be earned.

“It’s easy to value our lives on our career success when what matters most is our character. Please remember that the work you have done is not as important as the person you have become. Congratulations on your retirement. I love you my friend,” Ransome concluded.

“I had just successfully completed an argument to suppress and an attorney came up to me and told me I had a ton of passion and that I was a ‘little blonde-headed Valerie.’ In that moment I didn’t fully understand the compliment, but I certainly do now,” Spahos said.

Spahos went on to praise Asbell for the impact she had on the prosecution function statewide and for the careers she has helped develop, to include hers.

“She has testified numerous times in front of the General Assembly for laws that will give people second chances as well as for tougher penalties for people that violate the safety of the community,” Spahos said. “Her voice is heard in and out of the courtroom. She has grit, she has guts, and whatever she does she does it with gusto.

“She never asks anyone to do anything she hasn’t done herself. I’ve never seen her back down for offering her opinion or sharing her insights…all of those things are deeply valued by her colleagues across the state. She has helped more people than she can realize. Thank you for sharing yourself. Being compared to you is one of my greatest compliments,” Spahos concluded.

Special presentations to Asbell included one of the state’s most prestigious honors, the Order of the Long Leaf Pine, given by NC House Representative Michael Wray on behalf of Governor Roy Cooper.

Beard praised Asbell’s work and referenced her as a gifted speaker.

“I don’t know of anyone other than Valerie who says the things the way they need to be said,” Beard remarked. “You are the best. I’m proud to have worked with you and watch you grow as a prosecutor.”

Current and past members of Asbell’s staff along with courthouse personnel formed a long line in front of the podium and presented their boss with a string of pearls and a plaque of appreciation for her 30 total years of service to the state. They also toasted Asbell’s husband, Jimmy. He was also treated to a song – “Because You Loved Me” – as performed by Sharon Peele.

Asbell’s son, Ethan, told his mom that the people who voted for her over the years did so because they knew she would stand up for them.

Larry Williams praised Asbell for giving him the opportunity to intern in her office, which inspired him to enroll in law school at NC Central University.

Scott asked those in the audience to stand if their path had crossed Asbell’s in some way during her career.

“Valerie, look around this room, this is your legacy…your living legacy, this is what you’ve done; every time you’ve encountered someone or helped them along the way, you’ve impacted their lives,” Scott noted. “You’ve poured yourself into these counties for 30 years. We celebrate you and this new chapter of your life.”