MURFREESBORO – The Chowan University athletic department has named Murfreesboro native Leon Eason as interim head coach of the football program as the search for a new head coach has begun. 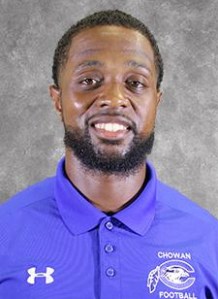 Eason has been an assistant coach with the football program for the last five seasons. For the last two seasons, Eason has served the program as the Strength & Conditioning Coordinator and Wide Receivers Coach.

The Hawks look to continue forward momentum in the post-CIAA and Mark Hall eras. Earlier this week, Hall was named as the new head football coach at UNC Pembroke.

Eason, a 2011 graduate of Chowan University, played four years of football for the Hawks as a defensive back. During that time, Eason accumulated 122 tackles, 12.5 tackles for loss, five forced fumbles, eight fumble recoveries and three interceptions.

“Leon is a players coach and he knows the program inside and out,” stated Patrick Mashuda, Vice President for Athletics. “Leon’s tenure and experience working with all of the players with strength and conditioning, have him poised to lead this football program while we actively search for a new coach.”

Prior to returning to Chowan, Eason was the defensive coordinator and defensive backs coach at Northampton County High School from 2012-14. In his first season, the Jaguars went 11-3 and made an appearance in the third round of the NCHSAA playoffs. Eason helped groom the talent of current-day NFL player Keion Crossen, now with the Miami Dolphins.

Following his stint at NCHS, Eason was the defensive coordinator and defensive backs coach at Hertford County High School. During his two years with the Bears, Eason helped the program to an 18-8 overall record and two appearances in the NCHSAA playoffs.

Eason was also an assistant varsity coach and head JV coach at Lawrence Academy. Additionally he has worked at the Ahoskie Recreation Center along with being a health and physical education instructor in the Hertford County School system.

Jarius Marlow , Andrew Sparano , and Bryan Harris will all remain on staff to lead the Hawks into the spring semester and beyond.

Chowan is coming off a 7-4 overall and 7-1 CIAA record. The Hawks posted a perfect 5-0 CIAA Northern Division record to claim its first-ever CIAA Division Title and an appearance in the CIAA Championship game.

“We look forward to building off of the success of the program in the last two seasons and keeping these four coaches in our fold will be instrumental in that process,” stated Mashuda.