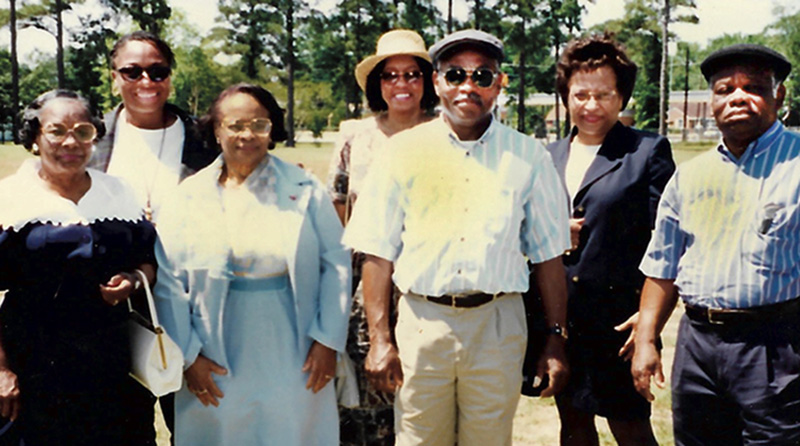 Part 2 of a series

The attack at Pearl Harbor pulled the United States into a global war that lasted from December 1941 until August 1945. As casualties mounted in the Pacific Theater, more temporary burials took place, many on small islands far from Pearl Harbor.

It was not until September 1947 that a ship carrying the first caskets of military personnel who died in the Pacific Theater departed for the United States mainland. Some of the caskets belonged to those who were casualties in the December 1941 enemy attack at Pearl Harbor, to include Gates County native William Jeremiah Powell, a messman onboard the USS Curtiss.

We do not know exactly when William came home. His father applied for a U.S. government headstone on Nov. 29, 1947, so perhaps William’s casket arrived in Gates County around that time. The marker was, however, never placed over the grave.

When his casket returned home, it was buried in what government records called the “Costen Cemetery.” The cemetery was simply a section of the Costen family farm. William’s mother, Cora, had been a Costen before she married, so the family’s decision to bury William at the family cemetery was understandable.

William’s niece, Brenda Powell Costen, was born in 1942, so she never knew her uncle. She does, though, vaguely remember the burial, either late in 1947 or early in 1948, because her grandmother (William’s mother) cried. Brenda was too young to understand why. For reasons that are not clear, when the headstone arrived in Gates County early in 1948, no one placed it over William’s grave. It is not clear what happened to it, although Brenda remembers that at one point, her grandfather stored it in his barn. Over the years, whatever marker the family had put at William’s gravesite was destroyed. Hogs freely roamed the area where the cemetery stood. No one kept up the cemetery’s grounds. Eventually, it was difficult to locate most of the gravesites, including William’s.

In the years after World War II, those military personnel who survived the Dec. 7, 1941 attack in Hawaii formed a national organization, the Pearl Harbor Survivors Association (PHSA). One of its purposes, as stated in its Federal charter, was “To shield from neglect the graves, past and future, of those who served at Pearl Harbor on such day.” In the 1990s, PHSA members worked to locate the graves of their fellow servicemen who died that December morning. The president of the Virginia chapter, Clark O. Martin, set out on August 31, 1994 to verify the location of Powell’s grave. He later wrote about his findings to a national PHSA officer. All Martin knew was that William’s gravesite was located in the Costen Cemetery, with no further information aside from that name. Martin spoke with “three funeral directors” in his area of Virginia, Suffolk County. (Suffolk is directly north of Gates County.) But the directors had never heard of Costen Cemetery. Martin knew that William had designated his father as next-of-kin; his father’s address had simply been Sunbury, in Gates County. Martin, therefore, drove there on the last day of August, 1994.

Once in Sunbury the “local Postmistress” advised Martin that “if I went a few miles further south I would find some Costens.” Martin looked at names on the rural mailboxes until he found one that read “Costen.” It belonged to one of William’s cousins. He directed Martin to the family cemetery, “which I found to be in very poor condition,” Martin later wrote. “It is located on a hog farm and is shared with three or more other families…It was not possible to establish the exact location of the grave because the area had not been secured against the wandering of the hogs.” A relative could only show Martin “the approximate” location of the gravesite. Martin learned that the local American Legion post had been named after William. Perhaps, Martin thought the post and the North Carolina PHSA state chapter could work together to reinter William in a national cemetery.

The veterans’ groups did so, with one minor change. Instead of a national cemetery, William was reinterred in a state military cemetery. According to an undated newspaper article from Sunbury, veterans’ groups raised over $3,000 to pay for the exhumation of William’s body. They were American Legion Post 426 and the PHSA’s Virginia and North Carolina state chapters. On March 27, 1996, William was buried at the Coastal Carolina State Veterans Cemetery in Jacksonville. Members of local PHSA chapters came for the service, as did members of local veterans’ groups. William’s niece Brenda attended the service, as she had the one in late 1947 or early 1948. Other relatives were there, including his nephew, James C. Powell. Over 55 years had passed since the day William died on his ship. Now he was again surrounded by others who had worn the uniform.

As members of the United States military, those buried at the state cemetery had sworn an oath to defend their country. William Jeremiah Powell did so on that historic Sunday morning early in December 1941.