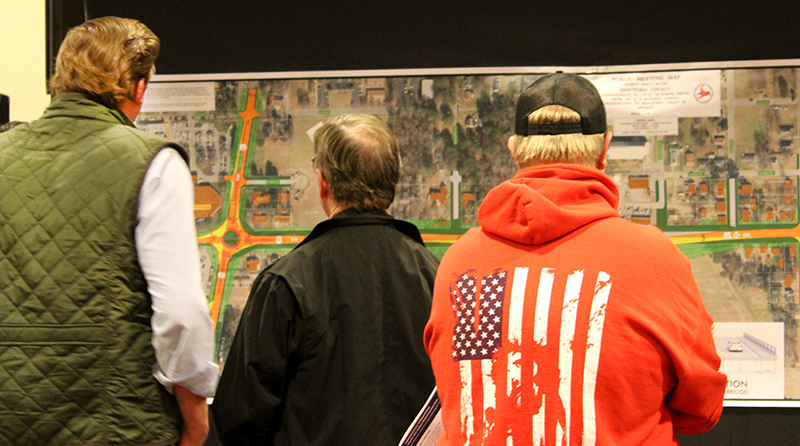 Local citizens study a map of the projects that NCDOT has proposed in Ahoskie. Citizens had the opportunity to look at maps and ask questions during a public meeting held earlier this week. Staff Photo by Holly Taylor

AHOSKIE – Members of the public had an opportunity to get a closer look at maps for an upcoming construction project that will affect Memorial Drive in Ahoskie in the future. 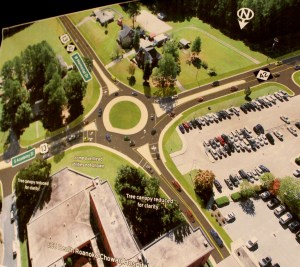 Shown here is an architectural drawing of the proposed roundabout at the intersection of Academy Street and Memorial Drive. For reference, ECU Health Roanoke-Chowan Hospital is at the bottom left. Staff Photo by Holly Taylor

The NC Department of Transportation (NCDOT) hosted an open house public meeting on Dec. 6 at Carpenter’s Shop church to answer questions and receive comments about the planned project to make improvements to US-13 (Memorial Drive) and NC-42 (S. Academy Street).

According to the project details, that section of Memorial Drive will include one 14-foot travel lane in each direction and a 12-foot center turn lane in between, along with 10-foot grass shoulders along the outside lanes and curb and gutter. The lane widths would be the same for the replacement bridge, but they will also include 5-foot, 6-inch sidewalks on both sides as well.

Lahiji also assuaged concerns that part of Memorial Drive would be shut down while the old bridge is replaced.

“We’re actually keeping traffic on it,” he said. “We’re not shutting down the road at all. The whole plan is to keep the road open, keep the traffic flowing.”

Instead, the NCDOT will construct the new bridge beside the old one, and then transfer traffic over to it when it’s ready.

The biggest impact will actually come from the widening part of the project. NCDOT consultant Aileen Mayhew said that the “worse-case scenario” they’re looking at right now is 10 residential relocations. But since the project is still in the preliminary design phase and they haven’t finalized drainage placements or utility relocations yet, they hope to be able to reduce that number.

“When we estimate an easement, we estimate on the high side,” Mayhew explained, “and so we’re hoping that once we get the final surveys, we can reduce that and minimize the relocations.”

“We’re here to get the public input, and then we go to final design and right-of-way plans,” she added.

Currently, right-of-way acquisition is scheduled to begin in July 2023 and construction will follow in June 2025.

But much of the evening’s conversation between locals and NCDOT officials centered on the other part of the project: a roundabout for the intersection of Memorial Drive and Academy Street, adjacent to ECU Health Roanoke-Chowan Hospital.

“A roundabout is just, in general, much safer compared to any other intersection type,” Lahiji explained. “It slows everybody down.”

“The roundabout is going to keep the traffic moving, improve the mobility in the area, enhance safety,” Mayhew added, explaining that it will decrease the amount of wait time at the intersection compared to how it is now with the stoplight.

Lahiji said that it might take some time for drivers to get used to, but there will be clear signage and pavement markings to make the adjustment easier.

“People don’t have to look both ways,” he said. “You’re just looking to your left. They’re supposed to work fantastically based on what we see in every other part of the country. Everyone’s happy with it, and we’re hoping for the same here.”

To travel through a roundabout, drivers must yield to any vehicles already in the roundabout. Once inside the roundabout, the traffic moves in a counter-clockwise direction. Drivers should use a turn signal when exiting at their desired street.

Several local residents chose to attend Tuesday’s public meeting. Some were just curious to learn more while others were opposed to the construction proposal.

Raleigh Johnson, a local pastor, said he didn’t think there was enough traffic or pedestrians in the area to warrant the changes, and he thought the money could be better spent addressing other road issues in town.

The current estimated project cost is just over $15 million.

For those who did not attend the public meeting, the NCDOT is still accepting comments until January 6. Comments and questions can be submitted by emailing US13-Improvements-Hertford@publicinput.com or calling 984-205-6615 (code: 4551).

Details about the project are also available online at https://publicinput.com/US13-Improvements-Hertford

Once the comment period is closed, NCDOT will review all comments and provide responses which will be made available online. They may also make design changes as necessary.

As previously reported by the News Herald, the Ahoskie Town Council learned more about the NCDOT project at their Nov. 15 meeting, and were surprised by the addition of the roundabout. Town Clerk Jennifer Bracy stated she and other town department heads were concerned about that part of the proposal and did not think it’s a “good idea.”