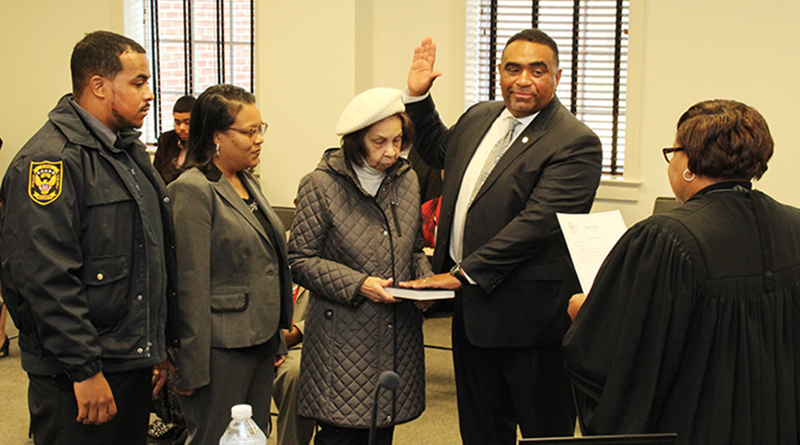 WINTON – There has been a change in leadership of the Hertford County Board of Commissioners.

As is customary, the board conducts an annual organizational meeting as part of their first regularly scheduled meeting in December. At that time the board nominates and votes on who will serve as chair and vice chair.

At their meeting here Monday morning (Dec. 5), Leroy Douglas nominated Andre Lassiter for chairman. There were no other nominations and thusly the board voted on the lone name submitted.

“I want to thank my fellow commissioners for having confidence in me and supporting me for this position,” said Lassiter, who replaces Commissioner Ronald Gatling who had held the position of chairman for the past four years. “I take this obligation very seriously and humbly accept this position.”

Lassiter, who earlier in Monday’s meeting took the oath of office to begin his second, four-year term after being reelected in November, thanked his grandmother, Agnes Hall, who was seated in the audience, for her steadfast support throughout his life.

“Without her, there’s no me,” Lassiter remarked, adding his thanks for his wife, Kimberly, and son, Andre Jr., also in attendance, for their love and support as well as the same from other family members and friends who were in the audience.

“They are my support system, they are the people who self check me, correct me, do those things behind the scenes,” Lassiter noted.

“I also want to thank former chair Gatling, he has served this board and this county well during his four years leading this board,” Lassiter continued. “He taught me a lot of things. He chaired this board through the [COVID 19) pandemic, which was a trying time for our country, our state, and our county. We didn’t have a playbook or a blueprint on how to govern during a pandemic. I thank him for his service, his commitment, and his leadership. I also thank Mr. [John] Horton for his leadership and commitment as the vice chair. He is a tremendous asset to this county.”

Horton was nominated to again serve as vice chairman. Commissioner Bill Mitchell was also nominated for that position and won that seat by a majority vote of the board.

“I want to thank the board for having the confidence in me to serve in the role of vice chair,” stated Mitchell. “As Chairman Lassiter said, these have been trying times for this county over the last four years and I echo the statement about Chairman Gatling’s leadership during that time. I’d like to thank former vice chairman Horton as well.”

The Association of Community College Trustees (ACCT) annually recognizes the contributions of trustees who have exemplified outstanding leadership while serving on local community college boards.

Lassiter also serves on several state and community boards, including the Roanoke-Chowan Community Health Center Board, the Ahoskie Housing Authority Board, the Roanoke-Chowan Community College’s Foundation Board, the North Carolina Department of Transportation Peanut Belt State Board, the Ahoskie Planning and Zoning Board, and the Hertford County Partners for Progress Board. He also played an integral part in the establishment of Special Olympics in Hertford County.