MURFREESBORO – Law enforcement officers across the nation take an oath to “protect and serve.” 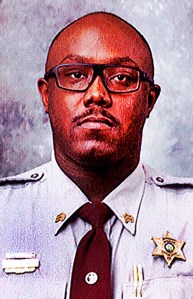 Sgt. Kendail Swain and Deputy Ron Lewter are being hailed as heroes after they were able to locate and rescue a motorist who was trapped and unconscious inside his burning vehicle. 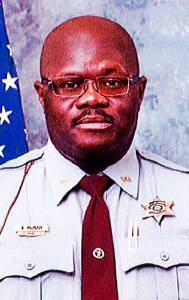 Hertford County Sheriff Dexter Hayes said on Nov. 27, Swain and Lewter were responding to a call for service regarding a suspicious vehicle traveling the wrong way on the Murfreesboro Bypass.

“The caller stated a red truck had turned onto a dirt path and hit a tree,” Hayes said. “Sgt. Swain and Deputy

Lewter were in the area attempting to locate the vehicle. When deputies found the vehicle, it was on fire and the victim was still inside.”

Hayes said at that point, Lewter began to work on extinguishing the fire under the front of the truck with his fire extinguisher while Swain, after relaying to the E-911 dispatcher that the Murfreesboro Fire Department was needed at the scene, attempted to break out the passenger side window to enter the vehicle.

“Sgt. Swain and Deputy Lewter fought the flames back for several minutes while attempting to enter the vehicle,” Hayes noted. “At one point, Sgt. Swain had to use the fire extinguisher itself to break out the window.”

The Sheriff added that once the deputies were able to open the door, the smoke and flames had consumed the front and cabin areas of the vehicle. Despite that danger, Swain entered the vehicle from the passenger side and unlocked the other door for Lewter who then took the seat belt off

the driver with flames around the victim’s feet.

“Sgt. Swain and Deputy Lewter pulled the victim from the vehicle and carried him to safety. The deputies rendered first aid to the victim who regained consciousness,” Hayes said.

The Murfreesboro Fire Department and Hertford County EMS arrived on scene and the fire was extinguished. The victim was transported to ECU Health Roanoke-Chowan Hospital and then airlifted to ECU Health Medical Center for treatment.

“If it wasn’t for the quick actions of these two deputies, the driver would have perished in that vehicle fire,” Hayes stressed. “They risked their lives to save another, which is the definition of a true hero. They did what law enforcement officers / first responders are trained to do in such situations.”

Hayes also thanked the caller who alerted the authorities.

“Their action played a part in saving the life of this motorist,” Hayes stated. “Thanks to the caller and Sgt. Swain and Deputy Lewter, and the Murfreesboro Fire Department and Hertford County EMS for a job well done.”

Hayes added that it is unknown as to why the motorist was driving down the wrong way or why the victim struck the tree.