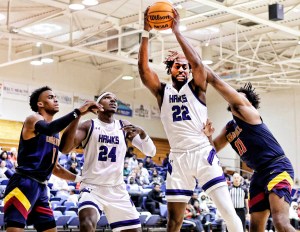 Chowan’s Isaac Hippolyte (#22) had a double-double with 10 points and 11 rebounds to help the Hawks defeat Emmanuel, 76-71, in a conference game on Monday night in Murfreesboro. Photo courtesy of Chowan University

The Hawks extended their win streak to five games here Monday night with a 76-71 win over Emmanuel. The win was also Chowan’s first vs. Emmanuel in their previous seven meetings.

Trailing 43-32 at halftime, the visitors chipped away at their deficit, eventually getting to within three, 52-49.

Out of the under-12 media timeout, Barnett picked up four points at the line along with a triple by Askew to push Chowan’s lead back to double-figures, 63-50.

Hippolyte and Koonce continued the scoring with a basket each. Askew connected from deep again before a 9-2 run by the Lions cut the deficit to six, 72-66.

On the next possession, the Hawks fouled a three-point shooter, but survived as the Lions missed all three attempts. Emmanuel missed their final three shots in the final 15 seconds as the Hawks turned the ball over twice in the waning seconds.

Chowan (5-3 overall; 3-1 in league play) hits the road to take on rival Barton in Wilson on Wednesday, Dec. 7. Tip-off is slated for approximately 7:30 pm.