AHOSKIE – Ridgecroft School will be represented by three of its teams in the championship round of the second annual Doug Cobbs Scholarship Basketball Tournament.

The school’s jayvee girls, varsity girls and varsity boys all won on Thursday night in the tournament semifinals.

In the varsity girls game on Thursday, MaKenzie Slaughter and Karley Jo Rose scored 15 points each to lead Ridgecroft to a 59-23 win over Northeast Academy.

The Lady Rams never trailed, building a 9-1 lead by the 3:11 mark of the first quarter led by a pair of baskets by Slaughter and a three-pointer from Klaire Cherry. 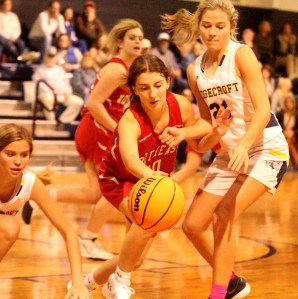 Northeast rallied, using a bucket each from Leah McDermont and Hayes Hatcher to close the first quarter followed by points from the same duo to open the second period where the Lady Eagles got to within 13-8.

However, back to back baskets from Cherry and Karley Jo Rose kicked the Ridgecroft offense back in gear. By the time Cherry buried a three-pointer and Hannah Slaughter added a basket off a turnover, both coming inside the final 50 seconds of the second quarter, the Lady Rams had stretched their lead to 22-10 at halftime.

Using a balanced attack, the Lady Rams opened the second half with an 8-2 run and a 30-12 lead fueled by baskets from Kate Chamblee, M. Slaughter, Rose, and Molly Brown.

Sparked by a deuce and a trey from Brown, two hoops by M. Slaughter, and a triple from Rose, Ridgecroft went on a 16-2 tear to open the fourth quarter en route to a 31-point lead at 53-22.

It took a while for Ridgecroft to get into an offensive flow, but once they did the Rams got points from eight players and used that balance to claim a 56-41 win over Southampton Academy in Thursday’s semifinals. 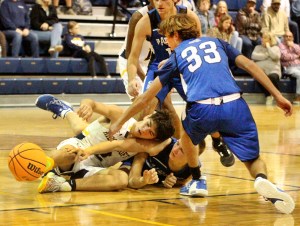 Holding a slim 10-6 lead late in the first quarter, the Rams used a pair of Nacir Lewis free throws and a three-pointer by Preston Edwards to stretch their advantage to 15-6 by the end of the period.

A running one-hander in the lane by Justin Peterson allowed the Rams to build a double-digit lead (20-10) a shade over three minutes into the second quarter. That margin nearly reached 15 points at halftime (29-15).

A deuce and a trey from Sawyer Chamblee plus a bucket down in the paint by Bill Vaughan staked the Rams to a 48-25 lead inside the first three minutes of the fourth quarter. That lead would reach as high as 26 points (56-30) when Edwards converted on another three-point play with 3:35 left.

In Thursday’s first semifinal action, Ridgecroft raced to a 25-4 halftime lead and then held off a hard-charging Northeast Academy squad to collect a 37-25 win.

The junior Lady Rams were led by Layla Oliver’s eight points, seven from Abigail Woodard, and six by Hannah Slaughter.

Northeast Academy’s Arland Davis had a big game for the junior Lady Eagles as she poured in a game-high 23 points, 19 of which came in the second half.

In Wednesday’s opening round action at the Ridgecroft gym, Northeast Academy’s varsity girls held Southampton Academy scoreless in the first quarter, building a 10-0 lead en route to a 34-17 victory.

In other first round action on Wednesday, Southampton built a 25-11 halftime lead and went on to defeat Ridgecroft School, 45-22, in jayvee boys action.

Grant Applewhite (16) and Jake Holland (13) each scored in double figures to top the Southampton scoring.

In Wednesday opening round action for the varsity boys, Southampton raced out to a 24-7 halftime lead en route to a 52-24 win over Northeast Academy.

Halifax was led by Zack White and Jackson Vincent who scored 16 and 14 points respectively.

No other scores were available from Wednesday’s first round action at Merry Hill.