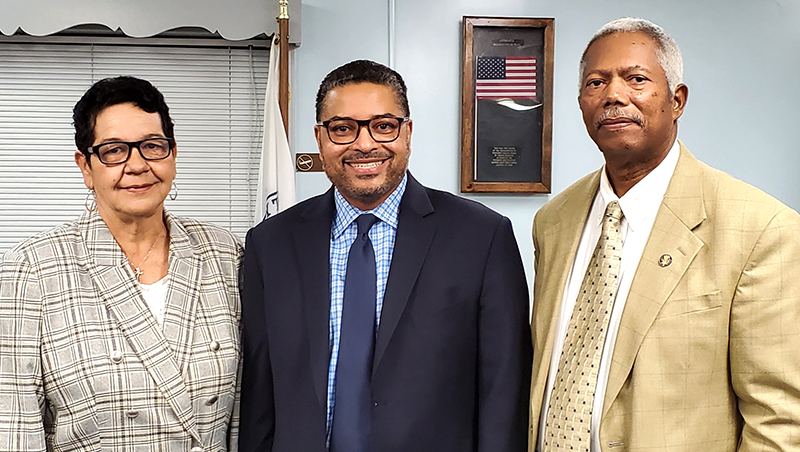 At their meeting here Monday night, the Hertford County Board of Education voted unanimously to hire Dr. Jesse Pratt as the next superintendent of HCPS.

Expressing his gratitude for the opportunity to lead the district, Dr. Pratt told the Board and audience present at the Monday’s meeting that he looks forward to becoming part of the community.

“I am excited to have the opportunity to join the Hertford County family,” he stated. “I would like to thank the board of education for giving me this extraordinary opportunity. I look forward to working with our staff, students, and community members to improve academic and social outcomes for all Hertford County Public Schools students.”

During the search process, the board reviewed applications from a diverse field of 12 candidates from four different states. Although many qualified candidates applied, the board felt that Dr. Pratt’s experience, leadership, and dedication to students and staff would best serve HCPS students, employees, and the community for years to come. The board expressed confidence that Dr. Pratt will lead the school system to even higher achievement.

Dr. Pratt has enjoyed a long and very successful career in public education spanning nearly 30 years in North Carolina and Indiana. He currently serves as the deputy superintendent of operations for the Winston-Salem/Forsyth County Schools (WS/FCS), where he also worked as an area superintendent (2019-2021) and, earlier in his career, an assistant principal (2001-2003).

Over the last three years, Dr. Pratt has played a pivotal role in helping WS/FCS significantly reduce its dropout rate.

Prior to joining WS/FCS, Dr. Pratt spent two years as the assistant superintendent for curriculum, instruction, and student services for the Thomasville City Schools. He previously served as a regional superintendent for the Indianapolis (Indiana) Public Schools (2015-2018) and a principal for the Guilford County Schools (GCS) (2003-2015). Dr. Pratt began his career in 1995 as a teacher for GCS, where he taught social studies and language arts to middle school students for six years.

Dr. Pratt has an impressive academic background, including his bachelor’s degree in middle school education from Appalachian State University (ASU). He went on to earn a master’s degree in school administration and an educational specialist’s degree from ASU, as well as a doctorate in educational leadership from High Point University.

Dr. Pratt replaces former HCPS Superintendent Dr. William T. Wright Jr. who, after a six and one-half year stay, resigned in May of this year to join the Sumter, SC School District as its superintendent. Tammi Ward, an assistant superintendent while Wright was with HCPS, has served as Interim Superintendent since that time.