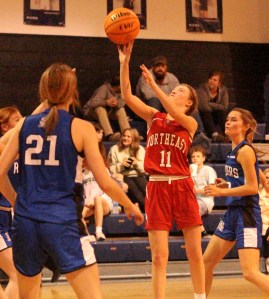 Sarah Kate Ricks (#11) launches a shot during a 34-17 win by the Lady Eagles over Southampton Academy. Staff Photo by Cal Bryant

The Lady Eagles held Southampton Academy scoreless in the first quarter, building a 10-0 lead en route to a 34-17 victory here Wednesday night in opening round play. 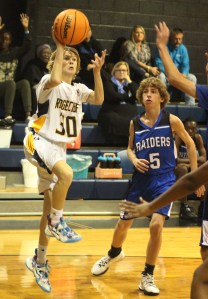 In other first round action on Wednesday, Southampton built a 25-11 halftime lead and went on to defeat Ridgecroft School, 45-22, in jayvee boys action.

Grant Applewhite (16) and Jake Holland (13) each scored in double figures to top the Southampton scoring.

Southampton advances to meet Northeast Academy at 5 pm today in the semifinal round of the jayvee boys bracket.

In Wednesday opening round action for the varsity boys, Southampton raced out to a 24-7 halftime lead en route to a 52-24 win over Northeast Academy. 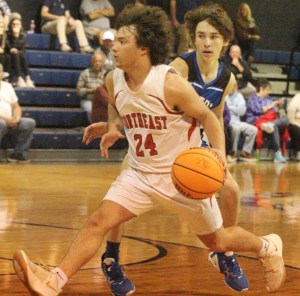 The Raiders advance to tonight’s semifinal round where they’ll square off against the host team, Ridgecroft School.

In the other half of the tournament bracket at Merry Hill, Lawrence Academy defeated Halifax Academy, 54-42. Mari Larry poured in 21 points to lead the Warriors. Mike Lee added 16 points.

Halifax was led by Zack White and Jackson Vincent who scored 16 and 14 points respectively.

Lawrence used the win to advance to tonight’s semifinals where they will host Pungo Christian Academy.

No other scores were available from Wednesday’s first round action at Merry Hill.