GATES – The Gates County Sheriff’s Office has advised numerous other law enforcement agencies to be on the lookout for a local woman accused of stealing a vehicle. 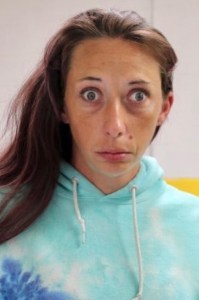 Campbell said Bradshaw was last seen in the 1300 block of Nov. 22. He added that Bradshaw is believed to be operating a 2011 Honda Civic, grey in color, with tinted windows, and a South Carolina license plate.

If you have information about Bradshaw’s whereabouts, contact the Gates County Sheriff’s Office at 252-357-0210.

This latest case marks the second time that Bradshaw has been involved with criminal activity over the past few months.

On Sept. 29, Gates County deputies were performing a security check at Family Foods in Gates where they observed a suspicious vehicle parked at the gas pumps for an extended period of time. As deputies approached the vehicle, they observed that the occupant was unconscious and slumped over behind the wheel.

Upon further investigation, Bradshaw was taken into custody and charged with felony possession of a Schedule II Controlled Substance and three counts of possession of drug paraphernalia.

Bradshaw was transported to the Albemarle District Jail and confined under a $10,000 cash bond.