In what NCDOT officials describe as projects that will “improve mobility and travel conditions along U.S. 13 (Memorial Drive),” they propose to widen that road from its intersection with South Academy Street (at the hospital) to Peachtree Street (adjacent to Feyer Ford).

That project calls for two, 14-foot travel lanes (one in each direction), a 12-foot center two-way left turn lane, 10-foot grass shoulders on each side of the travel lanes, and curb and gutter.

It also includes replacing the bridge now spanning the railroad tracks. The new bridge will consist of two, 14-foot travel lanes (one in each direction), a 12-foot center lane, and a 5-foot, 6-inch sidewalk on both sides of the travel lanes.

Additionally, NCDOT is proposing to remove the traffic signal at the intersection of Academy Street and Memorial Drive and replace it with a roundabout. A roundabout is a circular intersection where traffic moves around a central island and exits upon reaching its desired direction of travel.

According to NCDOT, right-of-way acquisition for the projects is scheduled to begin in July of next year. Construction is slated to get underway in June of 2025.

NCDOT has scheduled a public meeting from 5-7 p.m. on Tuesday, Dec. 6 at Carpenter’s Shop Church, located at 903 South Catherine Creek Road in Ahoskie. Maps of the projects will be displayed at the meeting and members of the NCDOT project study team will be available to answer questions and receive comments. 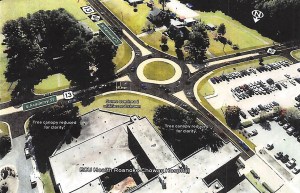 Comments and questions can also be submitted online (https://publicinput.com/US13-Improvements-Hertford) or by calling 984-205-6615 and entering Project Code 4551.

Members of the Ahoskie Town Council, at their regularly scheduled meeting on Nov. 15, were a bit surprised by DOT’s addition of the proposed roundabout.

“DOT has been trying to work on the [Memorial Drive] bridge project for probably a decade,” said Ahoskie Town Clerk Jennifer Bracy. “They reached out [to town officials] earlier this summer just to get any concerns the town had. I responded that shutting down the bridge would be a major hindrance to the town due to the amount of traffic on Memorial Drive. When they did reach out this summer there was no mention of the proposed roundabout.”

Bracy said she invited NCDOT officials to attend the Council’s Nov. 15 meeting to provide more insight into the projects.

“Their response was that they were having a public meeting on Dec. 6 for anyone with questions or concerns,” she stated.

Bracy added that upon talking to the Town of Ahoskie’s department heads, “we do not believe the roundabout is a good idea.”

As for shutting down the bridge during the length of the time it take to complete the project – which is unknown at this time – “it’s going to put a lot of traffic on our side streets and some of those streets are part of a [water/sewer improvement] project that the town will be working on,” Bracy noted.

Bracy added that she and the town’s department heads plan to voice their concerns at the Dec. 6 public meeting. She encouraged Council members to do the same.

“This is a big project that will put a lot of burden on the town, especially police, fire, and public works not to mention the ambulances using Memorial Drive to get to the hospital,” Bracy stressed. “This project may take two to five years to complete.”