MURFREESBORO – After three straight losses on the road, Chowan’s men’s basketball team picked up a strong regional victory in their home opener here Saturday where the Hawks defeated Catawba, 73-65. 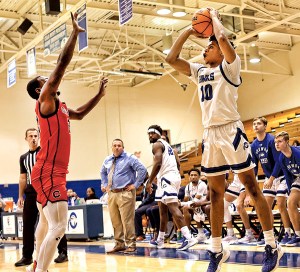 Christian Koonce (right) shoots over a Catawba defender during Saturday’s win by the Hawks in their home opener. Photo courtesy of Chowan University

Christian Koonce recorded his first double-double of the season with 12 points and 10 rebounds. Preston Le Gassick notched a career-high 12 points, while Daylan Askew collected 11 points and a team-high four steals.

Cheick Traore cleaned up the glass with a team-high 14 rebounds. Chowan outrebounded Catawba, 55-38.

The Chowan defense forced Catawba connect on just one of 11 three-point attempts in the second half. For the game, the visitors were 5-of-26 from beyond the arc.

The Hawks went 19-of-22 from the charity stripe, all in the second half.

Catawba went on an 8-0 run to start the contest before Chase Barnett collected a layup in transition. Traore added a putback basket before Veigar Alexandersson connected from deep to cut the deficit to 8-7.

The Indians pushed their lead to 16-11 despite shots from Koonce and Jay Estime. Askew added a layup before hitting a triple, but Catawba still maintained a 21-16 advantage.

Skyler Davies sparked an 8-0 run for the Hawks to take a 24-21 lead with a three-pointer. Koonce hit a jumper and Davies connected from deep again as the Hawks would never relinquish the lead from that point.

Catawba would cut the deficit to one on several occasions, but Koonce posted a layup prior to a quick 5-0 run by Le Gassick. Koonce hit a layup to stretch the lead to 33-27 as Catawba hit a three-pointer to close out the half, 33-30.

Davies put the Hawks on the board with a pair from the charity stripe to open the second half. Estime knocked down a triple along with baskets by Daylan Askew and Barnett pushed the lead to 42-36.

Catawba would close the gap on two occasions to a one possession contest. With 13 minutes to go, the Indians closed the gap to just one, 44-43, but Estime gave the Hawks a cushion with a three-pointer.

Chowan would pick up their next seven points at the stripe before Le Gassick dialed up a trey to push the lead to 57-49. Koonce gave the Hawks a double-digit lead with 5:25 to play, 64-54, with a jumper out of a timeout.

The Hawks would maintain their advantage at the stripe as Catawba was unable to find baskets from deep.

Chowan improved to 1-3 overall while Catawba fell to 4-2 with the loss.