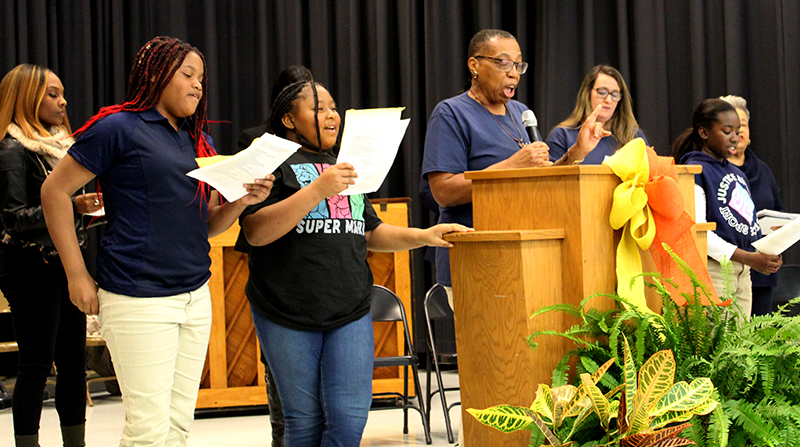 Riverview Elementary students lead a rendition of "Lift Every Voice and Sing" during the historic marker dedication event on Nov. 18 to honor the school in Murfreesboro. Staff Photo by Holly Taylor

MURFREESBORO – Hundreds of elementary students walk through the halls of Riverview Elementary School each day while school is in session. They follow in the footsteps of many students who came before them. 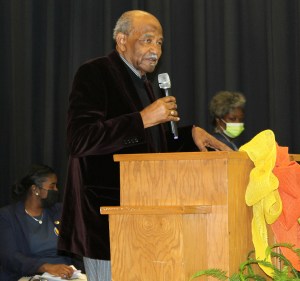 A newly-erected historic marker in front of the school now tells the story of Riverview, which played a role in African American education in Murfreesboro. A dedication ceremony was held on Friday, Nov. 18.

“Today is a very historic day,” said Riverview Elementary Principal Deborah Brown as she greeted students, staff, and community members in attendance for the ceremony. “We hope you leave here inspired by the stories shared and remarks given by our speakers today.”

The guest of honor was Dr. Dudley Flood, who taught at Riverview in the 1950s. Flood, a native of Winton and a graduate of C.S. Brown High School, taught and coached basketball for a number of years in Hertford County schools before eventually working at the NC Department of Public Instruction. He was instrumental in helping to end school segregation.

Dr. Flood focused his remarks on sharing words of wisdom to the young students. He recounted briefly the story of Alice in Wonderland as she tried to figure out which direction to go when she was lost. Flood urged the students to start thinking about which direction they want to go in their own lives and to start setting goals for the future.

“You’ll never reach a goal you haven’t set,” he said. “Opportunity is out there if you seek it. And wherever you go, whatever you do, the greatest talent that you must have is the type of talent to get along with others.”

He concluded his remarks by asking everyone to continue building upon the legacy of Riverview. 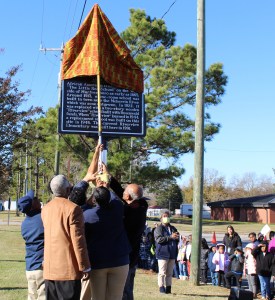 Members of the Hertford County Board of Education along with Dr. Dudley Flood unveil the new marker in front of Riverview Elementary School which details its history all the way back to 1865. Staff Photo by Holly Taylor

Hertford County Schools Assistant Superintendent Dr. Michelle White said it was an honor to celebrate the history of Riverview Elementary.

Members of the Hertford County Board of Education – including Board Chair Sheila Porter, Dennis Deloatch, Rev. Dr. James Shearn, and Eddie Hall – also shared a few brief words of encouragement and support.

“You’ve all heard the legacy of Dr. Flood. Each and every one of you can do as great as he has done, and even greater,” said Shearn.

“Take the words of wisdom you heard today and decide the path you want to make for your life,” Hall added.

The historic marker for Riverview was made a reality through efforts by the Murfreesboro African American History Coalition, a group that works to document, preserve, and promote the local history of African Americans in the town and the surrounding area. Grace Wright and Jackie Ruffin-Pittman, both members of the Coalition and Riverview alums, also spoke during the event.

Wright shared a brief overview of Riverview’s history, from when it began as “The Little Red School” in 1865 to how it changed and grew over the years. In 1913, a one-room school was built near the Meherrin River, but it quickly needed expansion. In 1922, a two-story school was constructed with Rosenwald funds. The school burned down in 1944 but was rebuilt on the current site in 1946. The brick building which houses students today was built in 1991. 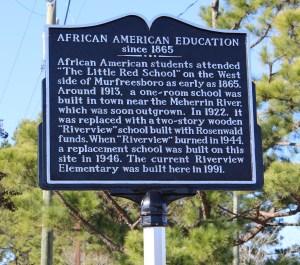 The marker was made a reality through efforts by the Murfreesboro African American History Coalition. Staff Photo by Holly Taylor

Ruffin-Pittman explained more about Rosenwald funds, which were used to help build schools for African Americans throughout the South in the days of segregation. She also encouraged the students to learn as much as they can about history.

Following a rendition of “Lift Every Voice and Sing” by everyone in attendance, the ceremony continued outside with the unveiling of the marker.

Rev. Berna Stephens, a former Riverview alum who also serves as Mayor Pro Tem on the Murfreesboro Town Council, led a moment of silence outside.

“Let us remember those who have come before us, who have sat and laid the foundation for us to be better educated, be productive citizens. Let us recognize all the things they left for us: love, joy, peace, and hope,” Stephens said.