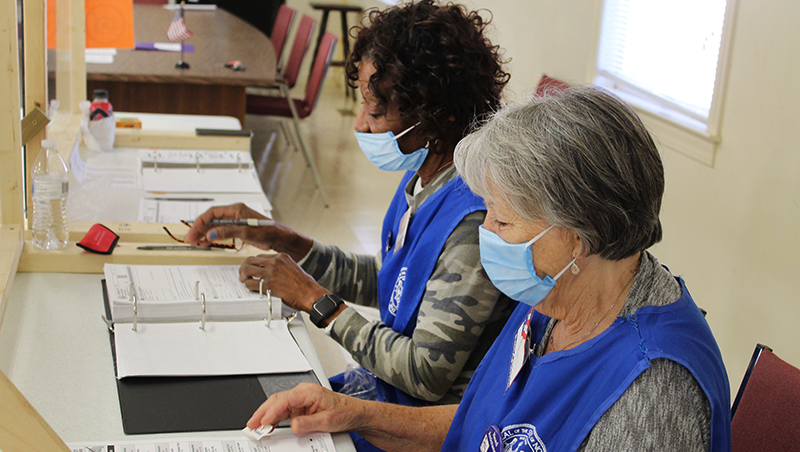 Unaffiliated candidates were unsuccessful in their bids for local office in Northampton County, according to the unofficial results of the general election on Nov. 8.

Three seats were up for grabs on the Northampton County Board of Commissioners. Two new faces were elected to fill those positions, while one incumbent will start a second term.

Of Northampton County’s 13 voting precincts, Martin carried seven of those, with his biggest margins coming from the Garysburg/Pleasant Hill precinct (won by 225 votes), the Gaston precinct (won by 127 votes), and the Seaboard precinct (won by 124 votes). Martin also had a large turnout during One-Stop early voting, receiving a total of 2,205 votes compared to Jenkins’s 874.

Jenkins won a few precincts, mainly in the northeastern part of the county as well as the Lake Gaston precinct, but it was not enough to overcome the gap. In the Creeksville precinct, the two candidates tied, receiving 81 votes each.

Earlier this year, Martin narrowly won the Democrat primary for District 3, defeating incumbent Nicole Boone by less than 10 votes. A recount was held which confirmed Martin’s win by a final total of six votes separating the two candidates.

In District 4, Democrat candidate Melvetta Broadnax Taylor defeated unaffiliated challenger Anneke Revelle with a total of 3,611 votes to 2,881, a difference of 730 votes.

Taylor’s wins in the Gaston (won by 114 votes), Garysburg/Pleasant Hill (won by 221 votes), Seaboard (won by 73 votes), and Rich Square (won by 45 votes) precincts, plus her One-Stop early voting margin (won by 978 votes) were enough to secure her win.

In the Democrat primary earlier this year, Taylor unseated District 4 incumbent Joyce Buffaloe who was seeking a second term on the board.

The closest race of the night in Northampton County was for District 5 Commissioner. With a margin of 240 votes, Dr. Kelvin Edwards, the Democrat incumbent, secured his second term. He received 3,485 votes while Republican candidate Caroline M. Long received 3,245.

Laquitta Green Cooper, the Democrat candidate for Clerk of Superior Court, ran unopposed for another term and received 5,003 votes. A little over half of those votes were cast during the One-Stop early voting period.

Incumbent Sheriff Jack Smith, a Democrat, also ran unopposed on the ballot for another term. He received a total of 5,821 votes. His votes were almost evenly split between early voting and Election Day voting.

Two seats were available for Northampton County’s Soil and Water Conservation District Supervisor, and only two candidates had filed to run for the nonpartisan race. Mark McGee received 4,502 votes and Gregory Lewis Harris, Sr. received 3,797. There were also 111 miscellaneous write-in votes for the race.

Voter turnout in Northampton County was just over 51 percent.

All results are unofficial until canvassed by the Northampton County Board of Elections.