Williams is finalist for national award

GATESVILLE – Gates County Public Schools Superintendent Dr. Barry Williams was among the three finalists for the 2022 national Superintendent of the Year award. 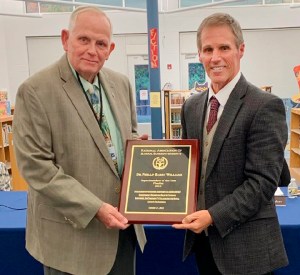 As part of his national recognition, Dr. Barry Williams (right) was honored by the Gates County Board of Education with a plaque presented Nov. 1 by board chair Ray Felton. Contributed Photo

While that honor was bestowed upon Rob Clayton, Superintendent of the Warren County Public Schools in

Bowling Green, Kentucky, Dr. Williams was thankful for the recognition the process brought to the Gates County Public School system.

“The award is not an individual award, but an award for our school district, the team of administrators, teachers, support staff, students and the Board of Education who all work tremendously hard to ensure that our school district is successful,” Dr. Williams stated.

“I’m very honored to be recognized by the National Association of School Superintendents as a finalists for the 2022 NASS Superintendent of the Year,” Dr. Williams continued. “I am even more proud and honored to have been presented with a plaque commemorating this accomplishment from Board Chair Ray Felton and the Gates County Board of Education.”

The presentation of that plaque came at the most recent county school board meeting held Nov. 1.

The trio of national finalists – to include Dr. Nikki Woodson of the Metropolitan School District Washington Township in Indianapolis, Indiana – were chosen by NASS based on evidence of outstanding achievement as a school district superintendent, demonstrated belief in continuous improvement, and commitment to collaboration and mutual support in the profession.

For Dr. Williams, the honor comes on the heels of being named the first-ever recipient of the Dr. Dwayne Stalling Leadership Award, presented last year by the North Carolina School Superintendents’ Association.

The award is in honor and recognition of a superintendent who has demonstrated a strong dedication to public education, commitment to academic excellence, and a continual focus on professional growth and student learning.

Williams is the longest-tenured school superintendent in the Roanoke-Chowan area. He came to Gates County in December of 2011 after serving a two-year stint as Superintendent of Schools in Rangely, Colorado.

Born and raised in Appalachia, VA – located in the state’s southwestern mountains – Williams graduated in 1995 from Clinch Valley Community College (now the University of Virginia at Wise) with a Bachelor of Arts in biology with a minor in chemistry.

Armed with that education, Williams launched his career as a math and chemistry teacher at his high school alma mater in Appalachia. There, he also served as an assistant football coach and coached volleyball and girl’s basketball.

A few years later, Williams obtained his Masters in Administration and Supervision from Virginia Tech, a degree that led to his first role as an administrator – assistant principal at J.J. Kelly High School in Wise, VA in 2002. Five years later he was promoted to principal at Coeburn Elementary School, also located in Wise County.

He received his Doctorate in Education in 2007 from Nova Southeastern University in Florida, a degree that led him to seek a job as a superintendent and was hired by the Rangely, Colorado School District.