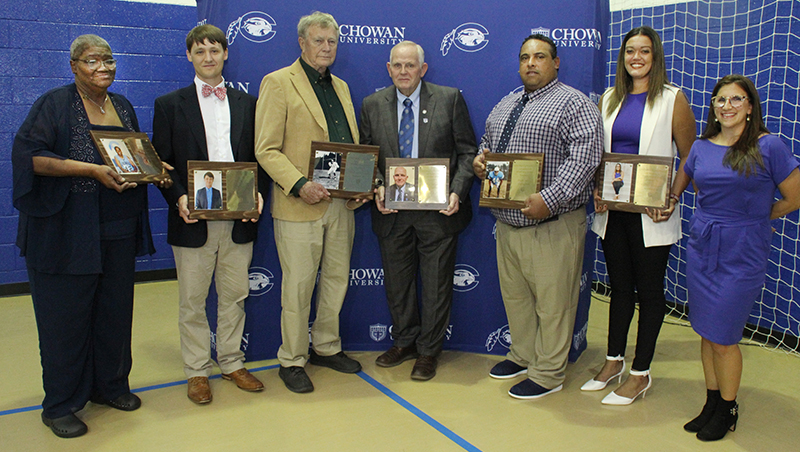 MURFREESBORO – Of the eight individuals inducted here Saturday evening into the 2022 Chowan University Jim Garrison Sports Hall of Fame, exactly one half boast of roots to the local area.

Felton, a native of Gates County where he still resides, was the owner of a successful local business before retiring in 2015.

“Ray has been a faithful servant to his community and to this university,” stated Patrick Mashuda, Chowan’s Director of Athletics. “He is a member of the Board of Trustees and a very generous donor to Chowan, particularly to the athletic department. Because of his business (Metal Tech of Murfreesboro) we’ve been able to purchase new scoreboards and revitalize some of our old ones.”

Felton said the Hall of Fame recognition is an esteem honor, both for him and his family.

Felton said his association with Chowan began in the 1990’s when his oldest son, Wayne, was a student there. He later became a benefactor to the university’s athletic program at a time when the now late Felicia Hollingsworth served as the Executive Administrative Assistant to the Vice President of Athletics and Coordinator of the Membership Services for the Brave Hawks Club.

“We became friends for life,” he said. “She became more like a sister to me.”

Felton added that he was honored to serve Chowan, first as a member of the Visitors Board and then as a Trustee.

“This is especially gratifying for me considering I come from the school of hard knocks,” he noted. “Serving on those boards has been an enriching and learning experience. I’ve been honored to serve with some wonderful people with vast knowledge and experience they shared with me.”

Forbes, a Murfreesboro native, was recruited to play golf at Chowan and was a medalist in his first ever collegiate match. He won the CIAA championship in 2012, carding a 5-under par 68 in the final round.

“Congratulations to all the inductees, you are all very deserving of your honor,” Cliff Forbes stated. “This Hall of Fame is named after Jim Garrison, a man I knew. As a matter of fact, I hit a golf ball one time that broke his car window. Luckily, my dad had him insured.”

Forbes recalled growing up in Murfreesboro that he had the opportunity to participate in the summer basketball camp at Chowan as well as attending numerous athletic events.

“I always enjoyed the small school environment here; I knew I didn’t want to go to college anywhere but here at Chowan,” he stressed.

“If it wasn’t for her, I wouldn’t be standing here tonight; she is like a second mom to me,” Forbes said. “I also thank my parents, my brother, my wife and two-year-old daughter, and the Edwards family.”

A native of Virginia, Long played middle linebacker at Chowan beginning in 1993. He still holds records for single-season tackles (145) and unassisted tackles (92) and was named as the Male Athlete of the Year.

Long has worked the past 26 years for Northampton County Public Schools. He has been a teacher, grant coordinator, assistant principal, and principal and is currently an assistant superintendent overseeing human resources and special projects.

He is married to Meredith Long, a former softball standout at Chowan who was inducted into the Jim Garrison Sports Hall of Fame in 2006. Mark and Meredith become the first husband and wife duo to be inducted for their athletic achievements at Chowan.

“This is truly an honor to be a part of this Hall of Fame class,” Long stressed.

He noted that upon graduating from high school, he didn’t consider going to college. However, a former high school teammate convinced him to go to Chowan.

“I made a phone call to Chowan and was put in touch with Dan Surface (then the football team’s defensive coordinator). That one phone call changed my life forever,” Long recalled.

He said that Surface and Garrison were “tremendous men and coaches who made a big impact on my life. They were tremendous builders of character, self respect and citizenship.”

“I may have had a lot of tackles in my years here, but it was coach Surface who drew up the schemes that put me in the position to make those tackles,” he continued.

Vaughan, a native of Murfreesboro, transferred to Chowan in 2002 from Louisburg Junior College. In two seasons with the then-Braves, Vaughan averaged 17.9 points and 10.9 rebounds per game, both of which remain as school career records. She also ranks at the top for single-season scoring average (20.4), single-season points (531), single-season field goals (180), and single-season free throws made and attempted (143-199).

Vaughan was inducted posthumously. She passed away in March of 2021 while working at Raleigh Durham International Airport.

“It is with honor that we accept this award on behalf of the late, great C.C. Vaughan. She was always passionate about sports, especially basketball. Her love of basketball led her to coach on various levels and to play overseas in Barbados for a period of time. We, the family, thank all the coaches that played a part in her success, and to Chowan for the opportunities provided to her. As we accept this honor on her behalf, we can feel her presence in this room. If she was here, she would be smiling – showing off those pearly whites – as only she could. Thank you for this honor,” said a spokesperson of the Vaughan family.

During Gibson’s two years playing football for Coach Garrison, the Braves won a combined 13 games and were ranked as high as #6 in the nation. After graduation, he returned to his native Lexington, NC where he spent 30 years as a police office and also coached football at Lexington Middle School for 20 years where his teams won eight conference championships and recorded five undefeated seasons.

“I’m at a lost for words as this is an award I never expected to receive,” Gibson stated. “Out of high school, I only had hopes of being a laborer; didn’t think about going to college, much less than playing football in college. That is until one day when my phone rang and it was coach Jim Garrison. He offered me a chance to play at Chowan and it was two of the best years of my life.”

She currently works as a Senior Government and VA Healthcare Operations Coordinator and lives in Charlotte.

“I’m very blessed and very thankful that I chose Chowan,” Monroe said. “This school made me feel as though I was at home. I’m truly grateful and thankful for this award.”

Rogers was a four-year starter for Chowan’s women’s soccer program where her 30 career assists still ranks number one. Her 38 career goals ranks #3 in program history.

As a senior, Rogers was named the university’s Female Athlete of the Year.

She currently works as the Registered Nurse Community Integration Consultant for the Virginia Department of Behavioral Health and Developmental Services.

“Thank you all for this incredible honor; I’m so glad to be a part of this group of inductees, and for Chowan for recognizing my accomplishments,” said the Chesterfield, VA native. “I thank coach [Stuart] Horne for pushing me to come to Chowan and encouraging and pushing me every game to become a better player.”

Taylor, a native of Plymouth, came to Chowan after serving in the U.S. Army for nearly four years. He played football and was a member of the track and field team while maintaining high grades that led him to an invitation to join the Phi Theta Kappa honor society.

He currently resides with his wife in Stella, Missouri where they own and operate a small black angus cattle farm.

“Chowan, coach Garrison, and coach [Jerry] Hawkins had a tremendous influence on my life,” Taylor remarked. “You are looking at a country boy success story…successful teacher, successful coach, successful counselor, and successful financially. I thank Chowan for all this and for this honor.”