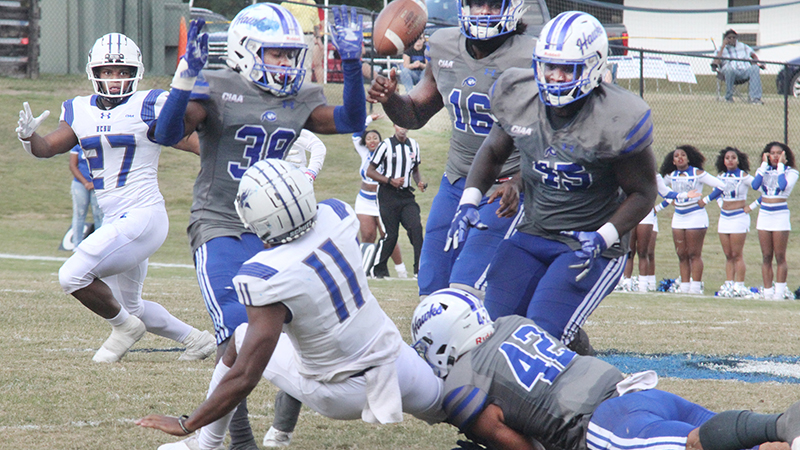 MURFREESBORO – Patience is described as the ability to wait for something worth having without showing an overabundance of frustration.

Chowan University’s football life in the CIAA fits that bill and a 14-year wait is over as the Hawks conquered the league’s Northern Division for the first time in program history after routing their rival, Elizabeth City State, 54-8, here Saturday in the regular season finale. 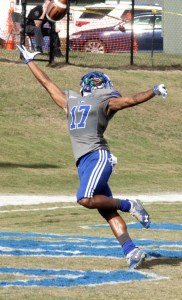 Sophomore receiver Malik Tobias had two touchdown grabs in Chowan’s big win over ECSU, including this remarkable catch in the endzone off a 37 yard strike from Rashad McKee that staked the Hawks to a 21-0 halftime lead. Staff Photo by Cal Bryant

With the win, Chowan (7-3 overall and 7-1 in conference play) gets a rematch against Fayetteville State (8-2; 7-1) in the CIAA championship game at 1 p.m. on Saturday, Nov. 12 in Salem, VA. The two teams met in Fayetteville during the regular season with the Broncos coming out on top of a 13-10 score. Chowan has since won five straight games.

On Saturday, the Hawks soared on both sides of the ball in putting together their most dominating performance of the season.

Offensively, quarterback Rashad McKee had his hand in five touchdowns (three passing en route to his 172 yards through the air, and two on the ground as part of his 89 rushing yards). Shavon Harkless led the Hawks on the ground, rushing for 101 yards on 15 carries and one touchdown.

Malik Tobias led the receivers with four catches for 110 yards and two TDs.

Montre Moore collected seven tackles to eclipse the 100 tackle mark on the season and became the first Chowan Division II player to reach that milestone.

Simeon Burns and Jakob Streeter each had an interception. Tavias Higgs recorded a scoop-and-score following one of Cameron Rampersaud’s 1.5 sacks on the day. 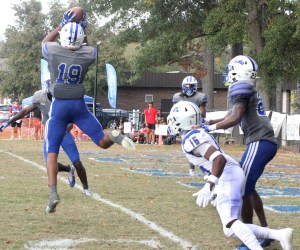 Simeon Burns (#19) leaps to make an interception at his goal line early in the third quarter that sank the hopes of a comeback by the Vikings. Staff Photo by Cal Bryant

Chowan’s offense didn’t allow the crowd time to catch their breath walking to their seats by scoring just 67 seconds into the game when, on the third play from scrimmage, McKee threw deep to Tobias and they connected for a 51-yard touchdown pass.

The Hawks would score again in the first period, this time on a 45-yard run by McKee after Chowan set-up in Vikings territory following an 18-yard punt by the visitors. Jake Ray’s second straight PAT kick made it a 14-0 lead.

Streeter’s interception late in the opening quarter set the table for a five play, 59-yard drive that ended early in the second period with Tobias making an unbelievable grab just inches inside the back line of the endzone of a 37-yard pass from McKee. Ray’s PAT allowed Chowan to build a 21-0 halftime lead. Harkless had a pair of key first down runs on that drive.

ECSU moved the ball down the field and into the redzone on opening possession of the second half. However, that momentum ended when Burns made a leaping interception at the goal line.

The Hawks then used a 13-play, 92-yard drive to sink the Vikings. McKee started the drive with a 25-yard run before connecting with Laurence King and Tobias on first down passes. Caleb Pierce briefly came in at quarterback and connected with Tyrek McNeil for a 21-yard completion before McKee returned to punch it in from eight yards out to lead 27-0. 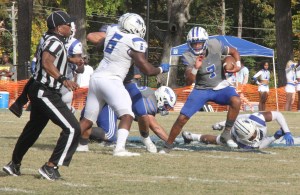 Chowan quarterback Rashad McKee is shown here running for a portion of his 89 yards in Saturday’s big win at Garrison Stadium. Staff Photo by Cal Bryant

Chowan completed the rout by scoring 27 points in the fourth quarter: an eight-yard TD pass from McKee to Demetrius Moore; the scoop-and-score fumble return (17 yards) by Higgs; Pierce’s 25-yard dash to paydirt; and a 3-yard run by Harkless.