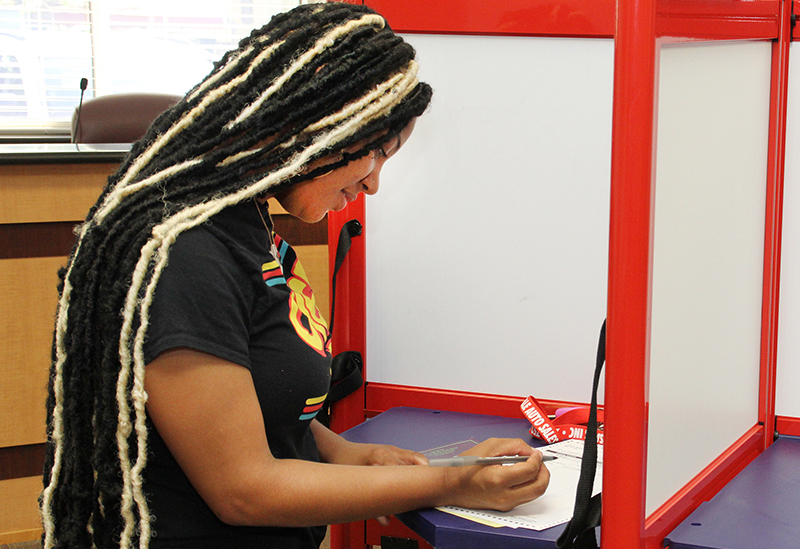 Kiara Melton studies her ballot at the Ahoskie 2 precinct during the May Primary. Polling places throughout the Roanoke-Chowan area will be open again on Tuesday of next week for the General Election. File Photo by Cal Bryant

Time is running out for candidates to do some last-minute campaigning. Early voting wraps up on Saturday, Nov. 5, and anyone wishing to cast their ballot after that must do so on Election Day on Nov. 8.

Polls will be open on Election Day from 6:30 a.m. to 7:30 p.m. The R-C News-Herald will post election results to its website (www.r-cnews.com) as they are made available on Tuesday night.

A number of federal, state, and local races will be on the ballot this year.

Those registered to cast ballots in the local Roanoke-Chowan area will be able to vote for US Senate and US House of Representatives (District 1) candidates. Senate candidates include Matthew Hoh (Green Party), Cheri Beasley (Democrat), Shannon W. Bray (Libertarian), and Ted Budd (Republican). US House candidates are Don Davis (Democrat) and Sandy Smith (Republican.)

Statewide races that voters in all four counties will cast their ballots for include several court seats. Those races are as follows:

All four counties in the Roanoke Chowan area are also included in NC State Senate District 3. The two candidates in that race are Bobby Hanig (Republican) and Valerie Jordan (Democrat).

Other races included on Bertie County’s ballot are as follows:

Board of Education – District 2: Rickey Freeman

Board of Education – District 3: Christine Dudley

Board of Education – District 4: Vernette M. (Vernetta) Henderson and Vivian B. Saunders

Other races included on Gates County’s ballot are as follows:

Other races included on Hertford County’s ballot are as follows:

Other races included in Northampton County’s ballot are as follows:

There are 12 polling places in Bertie County at the following locations:

In Gates County, there are six polling places at the following locations:

Hertford County is split up among 13 polling places at the following locations:

There are also 13 polling places in Northampton County at the following locations: