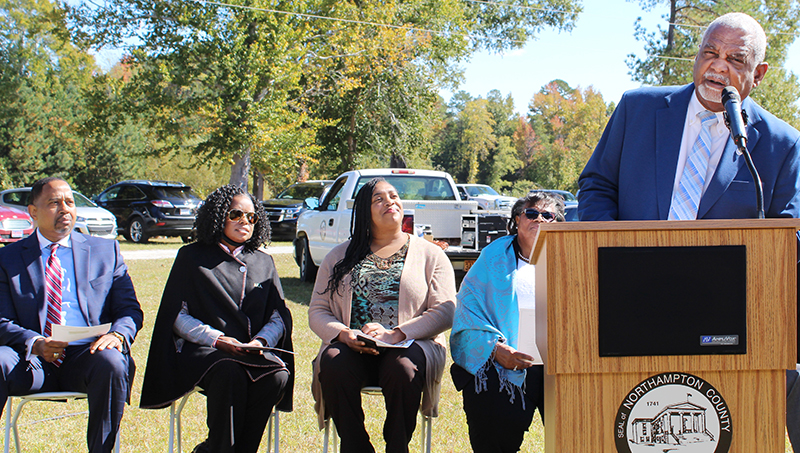 HENRICO – The Northampton County Commissioners recently marked another step forward in a project that began back in 2019.

They gathered, along with county staffers and community members, at the property on Edwards Beach Road at Lake Gaston for a groundbreaking ceremony on Wednesday, Oct. 19. The plan is to construct a new Cultural and Wellness Center – similar to the county facility in Jackson – at that location to serve citizens in the western part of the county.

“We’re here today to celebrate,” said Board Chair Charles Tyner in his remarks to the crowd.

He explained that the commissioners included this project in their strategic plan developed back in 2019, partially using advice from NC Department of Commerce which suggested better utilizing Lake Gaston as a resource for the county. He went on to share how they looked into land available for purchase on the lake. The site they settled on was owned by Grover Edwards and his siblings.

“This has been a dream,” said Edwards, speaking to the crowd later during the event.

He recalled earlier days when the land was used to raise peanuts by his family, and he said his grandmother once told him that “you’re going to look at this here one day, and you’re going to see a city.”

Edwards explained that he still had a draft of a similar development plan for the land from 40 years ago, and he was glad to finally see it come to fruition.

“You’ve got to stick with it if you believe in it,” Edwards concluded.

Tyner thanked the Edwards family for agreeing to let the county purchase the land for the project.

“The county owns this site all the way to just about the water, and then it turns and goes directly to the water,” he said. “What we plan to bring to this community, first of all, is a place where all of us can come.”

He also added that the facility should bring in additional tourism revenue by drawing in people from outside the county as well.

The building, designed by Oakley Collier Architects, is a two-story design that will house space for recreational activities and community events as well as administrative space for some satellite offices for certain county departments, such as the health department, sheriff’s office, and department of social services. It is expected to be approximately 27,000 sq. ft.

“This building will be first class all the way. Northampton County deserves something first class,” Tyner continued.

Some citizens in the past had raised concerns about the costs of the project or an additional tax burden, but Tyner emphasized that the commissioners weren’t doing anything to raise taxes.

“Let me assure you that the money we need to do all these projects have already been promised to us. I ain’t just talking the talk,” he said.

The News Herald reached out to the county for more details about the funding. The total projected cost is $8 million, and the funding is expected to come from the United States Department of Agriculture (USDA). It not known if the USDA funding is a loan, a grant, or a combination of both.

John Hamm, a representative from Oakley Collier Architects, spoke briefly during the event to talk more about the proposed design of the Wellness Center building. He explained that the building will be oriented to take advantage of the natural grade of the site, and the exterior will include wood and stone features to help it integrate with its surroundings.

“Currently, the design team is working on the development of the construction plans, and we’ll continue to work with the county over the next coming months,” Hamm said.

Once bids are completed, the building is expected to be constructed within a 16-month timeframe.

Other county Board of Commissioners in attendance expressed their excitement about seeing the project move forward.

“We deserve the same things you see in Wake County,” said Commissioner Kelvin Edwards, who represents the district where Edwards Beach is located. “This is a glorious day in Northampton County, and I’m proud to share this moment with each and every one of you.”

Commissioner Joyce Buffaloe, who kicked off the event by welcoming everyone, said, “This day would not have come to fruition if not for the hard work, endless hours, and true dedication of my fellow commissioners, county manager, economic development director, county staff, and community support.”

Commissioner Nicole Boone said her late father, James Boone, who served previously as a county commissioner also hoped that this part of Lake Gaston would be developed one day.

“I look forward to seeing what comes next for us here in Northampton County,” she concluded.

Shown here is the design, created by Oakley Collier Architects, of the new Cultural and Wellness Center planned for the Lake Gaston area of Northampton County.