BOWIE, MD – For the first time since the 2013 season, Chowan defeated Bowie State on the road as the Hawks defense came up with a fourth down stop at their 18 yardline with less than one minute remaining to preserve a 21-15 victory. 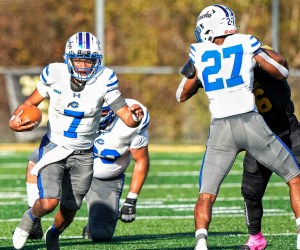 Chowan quarterback Rashad McKee (#7) uses a block from teammate Jeremiah Smith (#27) to rush for part of his 57 yards during Saturday’s 21-15 win at Bowie State. Contributed Photo

The win, Chowan’s third straight this month, improved the Hawks to 5-3 overall (5-1 in league play). It sets up a showdown at unbeaten and nationally ranked Virginia Union (8-0; 6-0) in Richmond on Saturday, Oct. 29. The Hawks and Virginia Union are currently tied atop the CIAA’s Northern Division, both at 3-0.

At Bowie State, Chowan quarterback Rashad McKee threw for 270 yards and three touchdowns while adding 56 yards on the ground. Nijere Peoples led the rushing attack with nine carries for 97 yards.

The Chowan defense held Bowie State to 92 yards rushing as the Hawks outgained the Bulldogs 437-329.

With the game on the line and their backs against the wall, Chowan’s defense saved the day.

With the Hawks clinging to a 21-15 lead with under two minutes remaining, Bowie State used a 60-yard pass from Dion Golatt Jr. to Kwincy Hall to move the ball to Chowan’s 27. Two short passes allowed the Bulldogs to reach the Hawks 18 yardline. On a fourth-and-one play at that point, Golatt flipped a pass to Samuel Doku, but Moore read the play and quickly dropped the BSU player for no gain as the Hawks took over on loss of downs to preserve the victory.

The Hawks struck first in the game when Chowan drove 80 yards in just three plays capped by McKee’s 73-yard pass to King and Jake Ray’s successful PAT at the 2:48 mark of the opening period.

Bowie State, after missing a 38-yard field goal late in the first quarter, finally got on the board near the midway mark of the second period. There, the home team capitalized on a muffed punt return by the Hawks, recovering the miscue at Chowan’s four yardline. The Bulldogs would punch it in from one-yard out on third down, but Hester blocked the PAT to keep the Hawks in front, 7-6.

That score stood at halftime.

After a pair of punts by both sides to open the third quarter, Chowan would turn the ball over near midfield allowing the Bulldogs the short field. Chowan’s defense stiffened, forcing a 45-yard field goal by Justin Zavala that handed BSU their first lead of the game, 9-7, at the 5:03 mark of the period.

On the ensuing drive, McKee found Tobias for 33 yards to move the ball to the edge of the redzone. A few plays later, McKee connected with Gatling for an 11-yard touchdown pass to put the Hawks back on top, 13-9, as the two-point conversion was unsuccessful.

Bowie State would regain the lead, 15-13, with 6:19 remaining in the contest as a long rush put the Bulldogs on the door-step of the endzone. The defense would not go down without a fight as Bowie State scored on third down, a one-yard run by Larry Williams, but Hester would block another PAT.

Chowan answered quickly as McKee found Tobias for a 61-yard touchdown pass to put the Hawks back on top. Bowie State would be flagged for illegal participation on the two-point conversion allowing the Hawks another attempt. The conversion was successful to put the Hawks up 21-15 with 5:59 remaining, setting up the thrilling finish.