AHOSKIE – The moral of the famous Aesop Fable “The Hare and the Tortoise” was that slow and steady wins the race. 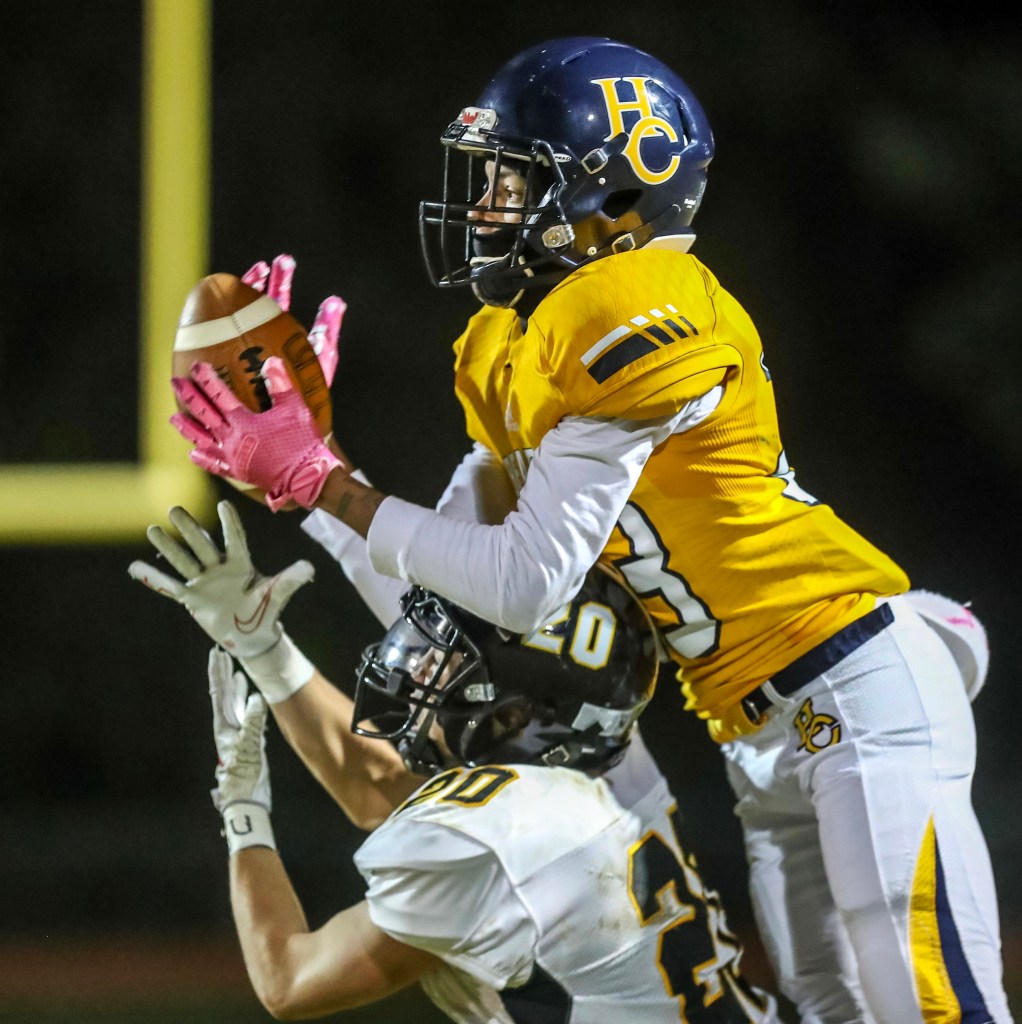 Rodgers, who was near perfect in the passing game (13-of-14), threw for 249 yards and five touchdowns and added another score on the ground.

Manteo, meantime, used a more deliberate pace. The Redskins had 69 offensive snaps for 299 total yards (3.9 yards per play). Their ground-oriented game, which accounted for 269 yards, was led by a pair of running backs who each exceeded 100 yards: Finn Shultz (22 carries for 116 yards) and Cam Sylvester (21-113). Shultz scored two of his team’s four touchdowns.

Despite the lopsided final outcome, this game was close in the first half and the score could have been tighter had Hertford County not come up with an interception at their own five yardline with 13 seconds left before halftime.

Instead, the quick-strike Bears turned a tight 24-12 lead into an 18-point cushion (30-12) only 52 seconds into the third quarter when a three-play drive ended with a 46-yard touchdown strike from Rodgers to Israel Powell.

Manteo would get as close as 30-20 with a shade under three minutes left in the third period, driving 56 yards in 10 plays capped by Shultz’s 2-yard TD run and a successful two-point conversion run by Sylvester.

But, as they did all night, the Bears answered quickly. Starting from near midfield after Manteo’s onside kick failed, HCHS drove 52 yards in just three plays, capped by Rodgers scrambling out of the pocket and weaving in and out of traffic en route to a 32-yard scoring run. He also ran in the conversion, increasing the Bears lead to 38-20 at the 1:37 mark of the third period.

On the game’s ensuing possession, HCHS defender Trequan Taylor dropped Sylvester for a three-yard loss on a 4th-and-7 play, setting the Bears offense up at Manteo’s 40 yardline. Hertford County took just two plays to score as Rodgers and Powell hooked up again, this time from 25 yards out. The PAT kick failed, but the Bears had opened up a commanding 44-20 lead early in the fourth quarter.

Powell finished with a game-high 166 receiving yards on five grabs.

Hertford County’s next possession was their longest of the game as the Bears drove 77 yards in seven plays capped by a 10-yard scoring pass from Rodgers to Jayden Pugh.

Both teams scored touchdowns during the game’s final three minutes: a 12-yard run by Shultz to cap a five-play, 51-yard drive against the Bears second string defense and a 31-yard tackle-breaking scamper by HCHS reserve running back Wayne Futrell.

Futrell (66 yards on three carries) and Sean Cruz (6-85) finished as the top rushers for HCHS. The Bears rushed for 214 yards on only 15 attempts.

Manteo’s deliberate style was evident right from the start as the Redskins took the game’s opening kick-off and drove 66 yards, all on the ground, on 10 plays capped by Sylvester’s 4-yard TD run. The conversion run failed, leaving the Dare County visitors with a 6-0 lead at the 6:23 mark of the first quarter. 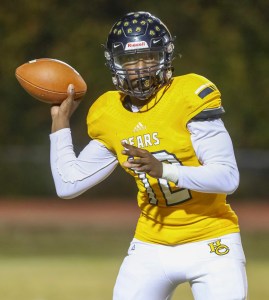 HCHS quarterback Keveon Rodgers threw for 249 yards and five touchdowns and added another score on the ground in the win over Manteo. Photo by William Anthony

After a squib kick-off allowed the Bears to start their first possession from Manteo’s 47 yardline, HCHS used only one snap and seven seconds to grab the lead when Rodgers hit Powell in stride for a 47-yard touchdown. Jahaun Bond ran in the conversion, handing the Bears an 8-6 advantage.

Manteo answered with another long, time-consuming drive as the Redskins marched 60 yards in 11 plays capped by a one-yard run by quarterback Jackson Gaskill on the first snap of the second quarter.

The Bears wasted little time in responding as Cruz ended a quick five play, 63-yard drive with his three-yard blast to paydirt for a 16-12 lead after a two-point conversion pass from Rodgers to Desmond Perry. Cruz had three runs on that drive totaling 32 yards.

Hertford County’s defense came up with a stop on Manteo’s next drive as Dominic Simmons and Brian Valentine turned in back-to-back big plays on third and fourth downs to end a Redskins’ threat at the Bears 37 yardline.

From there, it took only three plays for HCHS to find the endzone again, this time on a 39-yard TD pass from Rodgers to Jayden Robinson. Rodgers added the conversion run as the Bears held a 24-12 lead at halftime.

Hertford County used the win to improve to 8-1 overall and 5-1 in league play. The Bears will travel to meet Edenton-Holmes in the regular season finale for both teams next Friday (Oct. 28). The winner of that game will earn the #2 seed from the conference when the state Class 2A playoffs begin on Nov. 4.