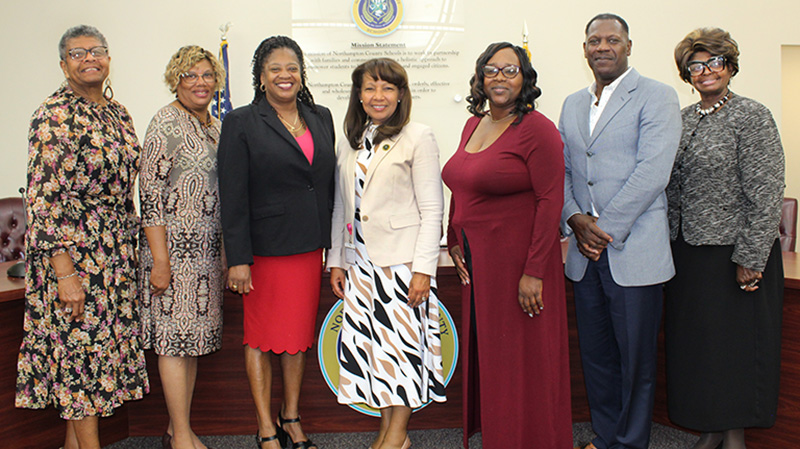 JACKSON – Dr. Rosa Atkins is ready to work hard as she takes the reins of Northampton County Schools for the next three years.

“It’s an honor and a privilege to have been selected to serve in this position,” Atkins told the News Herald. “I take those responsibilities seriously because there’s no more honorable duty we have than to educate our young people, and to educate them well.”

She added that it was also important to provide principals and teachers what they need to do that work, and she thanked both boards for putting their trust in her for the position.

In the next few weeks, Atkins said she plans to meet with and get to know the people in the school district as well as the local community. She was able to get a head start on that work as she mingled with teachers, principals, and other visitors who stopped by during the reception, which was held at the district’s Central Services office in Jackson.

“We’ll be looking at what has already been done, the progress that’s underway, and then developing that vision for moving forward and continuing progress,” she explained. “We’re focused on our students and making sure that we’re making decisions that’s in the best interest of our young people.”

Following the reception, Dr. Atkins and the Board of Education also attended the Northampton Commissioners’ meeting where she spoke briefly to emphasize her goal to focus on the students and create the best learning environment for them.

“Education is important to all of us. We support education,” said Commissioner Chair Charles Tyner. “All of us are graduates of Northampton County Schools.”

The rest of the commissioners shared words of welcome with Dr. Atkins as well.

Atkins comes to Northampton County with several years of experience in education. She recently served as Superintendent of Schools in Charlottesville, VA for the past 15 years before retiring in May 2021. Previously, she worked with Carolina County Schools and Richmond City Schools in Virginia as well.

For the last year and a half, she has worked with the Virginia Department of Education in a variety of roles, including a short stint as Interim State Superintendent.

Atkins is expected to serve a three-year term as the Interim Superintendent of Northampton County Schools. She is replacing Dr. Del Burns, who was appointed by the State Board as interim in Dec. 2021 for a one-year term. Burns, a retired superintendent who has previously served in several districts throughout the state, opted not to extend that year-long term.

Dr. Burns reflected on his time with Northampton County at the Board of Education meeting held on Oct. 10.

“Although there are many needs in this school district, there are people willing to step up to address those needs, and they do so on a daily basis with a good spirit,” he continued. “I believe the future of this district is bright, and that momentum continues to build and will carry the district in a positive direction toward higher student achievement and more effective and efficient operations of the district to support students.”

During that Oct. 10 meeting, the board also expressed their appreciation to Dr. Burns for his work over the past year.