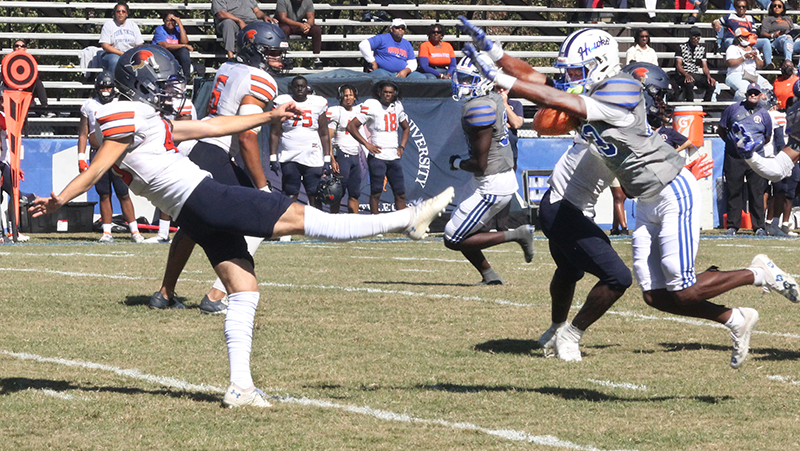 MURFREESBORO – From heartbreak to hysteria in just a matter of seconds….that’s the only way to describe the final minute of Chowan’s homecoming football game vs. Virginia State here Saturday.

Set-up by a miraculous 51-yard catch in double coverage by Demetrius Moore, Nijere Peoples scored two plays later on a one-yard run with 23 second left as the Hawks stunned Virginia State, 43-40, to remain in contention in the race for the CIAA’s Northern Division title.

The game-winning TD came just 29 seconds after Virginia State sank a dagger in the hearts of the Chowan faithful by taking their first and only lead of the game (40-35) thanks to a 25-yard pass from Jordan Davis to Upton Bailey.

It also marked Chowan’s first win at home vs. Virginia State dating back to 2010. 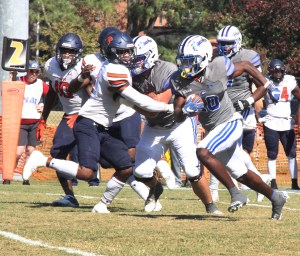 “For whatever reason, we play close games,” said Chowan head coach Mark Hall following another razor tight contest. “We find ways to win. These guys are resilient; they believe in themselves, they believe in their coaches, and we believe in them. I think it’s that belief, that faith in what we work on in practice, that shows up in game-defining moments like we saw today.

“We don’t panic,” Hall added. “We’re going to try and keep this thing rolling next week against a very good Bowie State team.”

In the game’s early stages it appeared that the Hawks, after several nail biters in the last several games, would enjoy an easy win as Chowan scored twice in the first quarter to build a 14-0 lead.

The first touchdown came on the game’s opening possession where Chowan drove 71 yards in seven plays capped by Jordaan Bailey’s 17-yard touchdown scamper and Jake Ray’s PAT that staked the Hawks to a 7-0 lead less than four minutes into the contest.

The Hawks padded that lead to 14-0 later in the period thanks to the play of their special teams unit as Caleb Hester blocked a punt that teammate J’Vin Farmer corralled and raced 11 yards for a touchdown with 2:07 left in the first quarter.

Both teams scored twice in the second quarter.

Virginia State erased the goose eggs off the visitor’s side of the scoreboard when Kimo Clarke barged into the endzone on a fourth-and-goal play from the one yardline that capped an 11-play, 63-yard drive. The PAT kick failed, leaving Chowan with a 14-6 lead.

The Hawks responded with a quick drive, covering 85 yards in just five plays that ended with Bailey’s five-yard TD run and Ray’s successful PAT for a 21-6 lead. Two carries by Peoples covering 34 yards and a long pass to Bailey were the key plays on that scoring drive.

The Trojans answered on the game’s ensuing possession, driving 50 yards in nine plays capped by Upton Bailey’s 2-yard TD run. The extra point was blocked by Chowan’s Gabriel Colborn to keep the score at 21-12. 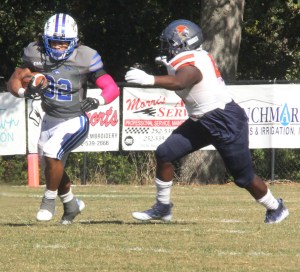 Nijere Peoples (#32) runs through an opening en route to part of his 60 yards rushing during Saturday’s win. Peoples scored twice, to include the game-winning touchdown with 23 seconds left in the game. Staff Photo by Cal Bryant

The next drive for Chowan would move into VSU territory, but a pair of 15-yard penalties backed the Hawks up to the original point of the drive. Patric Talbot flipped the field for the Hawks with a 58-yard punt down to the VSU 5.

Chowan’s defense would not give the Trojans much breathing room as Traveon Mitchell and Colborn forced negative yardage plays. The Hawks would force a punt and took over at the VSU 35.

The Hawks used the short field as Rashad McKee picked up a first down with a short throw to Jake Ray. McKee would take then it himself from nine yards out to put the Hawks up 28-12 at the half.

Chowan’s offense sputtered in the third quarter as the Hawks ran only eight plays and produced zero first downs.

Virginia State took advantage by cashing in on two scoring drives: TD runs of 20 yards by Darius Hagans and 2 yards by Clarke to close to within 28-26 entering the fourth quarter.

The Hawks got their offense moving in the right direction in the final period as McKee found Tyrek McNeil on a 17-yard swing pass before Jordaan Bailey collected 22 yards on three carries to move the ball into the redzone. Chowan gambled on fourth-and-two from the VSU 13 but was unable to convert.

Later in the period, with the Hawks facing fourth down deep in their own territory, VSU roughed the punter, giving Chowan an automatic first down. McKee took advantage of that mistake as he gashed the defense on a 47-yard run. Peoples finished off the drive with an 11-yard TD run to put the Hawks up 35-26 with 5:21 remaining in the game.

The Trojans would strike quickly as Jordan connected with Roy Jackson III on a slant route near midfield that turned into a 47-yard touchdown. The PAT kick got the Trojans to within 35-33 with 3:35 remaining, setting the table for the thrilling conclusion.

McKee had a big game for the Hawks, passing for 119 yards while adding 139 yards on the ground. Jordaan Bailey added 61 yards and two touchdowns on the ground, while catching two passes for 49 yards. Peoples added 60 yards rushing with two scores.