Elijah Outlaw (13 carries for 113 yards) and Keveon Rodgers (9-105) each ran for triple digits on the ground while Rodgers added 197 passing yards and three touchdown strikes as the Bears beat the Bruins, 45-19.

HCHS used the win to improve to 7-1 overall while maintaining their second place spot in the conference standings (tied with Edenton, both at 4-1). The Bears will host Manteo this Friday (Oct. 21) before ending the regular season in a showdown at Edenton on Oct. 28.

Tied at 7-7 vs. Camden after each team reached the endzone on their respective first possessions, the Bears scored twice over a span of less than two minutes to gain the upper hand.

The first of those two scores came on Hertford County’s longest drive of the night: 80 yards in nine plays capped by a 7-yard TD run by Sean Cruz. The PAT kick failed, leaving the Bears holding a 13-7 lead with 1:17 left in the first quarter. 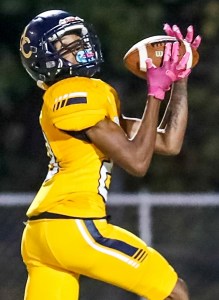 On Camden’s first snap of the game’s ensuing possession, a fumble by the Bruins was recovered by HCHS defender Justin Holloman at the visitor’s 39 yardline. Six plays later, Rodgers broke through three tackles on his way to a 19-yard touchdown run. He then added the conversion run, increasing the Bears lead to 21-7 at the 11:23 mark of the second quarter.

After the defense stopped a Camden drive at the HCHS 24 yardline, the Bears marched 76 yards in 10 plays – overcoming a pair of holding penalties along the way – and scored on a 53-yard pass from Rodgers to Jayden Robinson. The PAT kick was blocked, but the Bears owned a 27-7 lead with 3:10 left in the second period.

Camden answered by scoring the last touchdown of the first half (a 34-yard run by Malachi Wilson) and the first TD of the third quarter (a 4-yard blast by Wilson) to creep to within 27-19. Wilson finished his night as the game’s leading rusher with 141 yards on 21 carries.

The Bears bounced back on the game’s next possession, one that ended when Rodgers, on a 4th down and four play, called his own number and ran over two defenders as he raced 44 yards to paydirt. The conversion pass failed, but the Bears opened up a 33-19 lead with 6:17 left in the third quarter.

Set up by Isreal Powell’s interception, the Bears padded their lead to 39-19 early in the fourth quarter, driving 39 yards in five plays capped by a 23-yard scoring strike from Rodgers to Colin Brock.

Hertford County closed out the scoring with just under eight minutes to go in the game on a 15-yard run by Jahuan Bond.

Both teams scored on their opening possession.

Highlighted by Outlaw’s 38-yard scamper on the first snap of the game, the Bears used just three plays to drive 63 yards. That quick strike ended with Powell making a leaping grab in the endzone of a 27-yard TD pass from Rodgers. Caleb Barnes booted the PAT for a 7-0 lead only 63 seconds into the contest.

Camden produced 220 total yards, of which 212 were on the ground.