MURFREESBORO – Ridgecroft School came within one singles match of a complete sweep of the Tarheel Independent Conference’s tennis tournament here Monday at the Rose Family Tennis Courts on the campus of Chowan University. 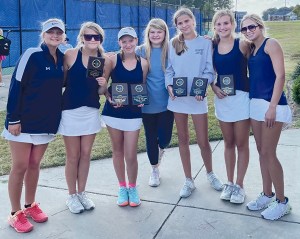 Ridgecroft, who posted an 8-0 conference record during the regular season, swept all three doubles matches and saw five of its players win during the half-dozen singles matches at the tournament.

Scores from doubles play are as follows:

Tournament individual champions crowned at the close of singles play were:

Ridgecroft’s Belle Turner was selected as the Conference Player of the Year. Other All-Conference performers were Sarah Kate Ricks of Northeast Academy, Melanie Rutledge of Pungo Christian Academy, Olivia Tynch and Lucy Spruill of Lawrence Academy, and Kate Chamblee of Ridgecroft.

Turner (MVP), Chamblee, Brown, and Byrum of Ridgecroft; Pierce and Davis of Northeast; and Phelps of Lawrence were named to the All-Tournament Team.

Veteran Ridgecroft School tennis coach Elton Winslow was named as the conference’s Coach of the Year.