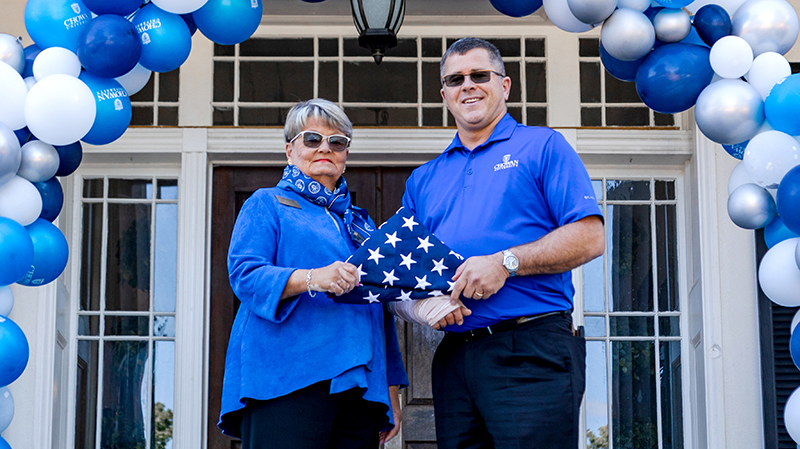 MURFREESBORO – Those who founded what is now Chowan University on Oct. 11, 1848 would be pleased to know that the institution of higher learning remains steadfast in its original vision to provide a “well-rounded education. 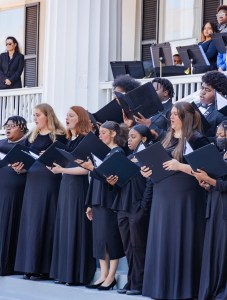 The Chowan Singers were part of Tuesday’s Founder’s Day event at the University. Photo by Chowan University

On Tuesday of this week (Oct. 11, 2022), Chowan University celebrated its 174th anniversary. A “birthday celebration” organized by the Office of Alumni Relations took place at the historic McDowell Columns Building.

University officials, employees, students, friends, and supporters gathered to celebrate Founder’s Day and what was the start of the 175th-year celebration.

President Kirk E. Peterson brought greetings noting Chowan’s “founding fathers, Dr. Godwin Cotton Moore and Dr. Archibald McDowell, and others who believed in a well-rounded education for young ladies has lived on for 174 years, transforming the lives of students in our region and across the globe.”

“Today we also celebrate our leadership over the years, the Trustees, the Board of Visitors, the Ministerial Board, and the alumni – these fine people held the institution together through wars, pandemics, and financial hardships,” Peterson added.

Most importantly, Chowan is a student-centered institution; therefore a fun, “birthday celebration” was created including cupcakes, a birthday song, and complete with a dozen birthday gifts of Chowan gear given to lucky drawing winners.

To mark the start of the celebration, Student Government Association President Kashara Simpson, Presidential Ambassador Patrick Krack, and University Relations Intern Harri Lovett unveiled the 175th-anniversary banner that now hangs from the McDowell Columns Building. The Chowan University Singers, led by Dr. Benjamin Thorburn, led the crowd in singing “happy birthday,” and the University’s Alma Mater. The Chowan cheerleaders, the Sapphires, led the crowd in a cheer. Rev. Mari Wiles offered a blessing of the University.

Via Ms. Shepheard, Senator Burr shared, “what a wonderful school we have nestled in Northeastern North Carolina,” later stating that “the founding and establishment of this great institution began generations ago, and all of you are continuing the legacy.”

As the university begins to commemorate 175 years in higher education, a committee was established by Peterson, which is chaired by Alumni Director Kay Thomas, and its members represent various segments of the university.

The University will begin incorporating and celebrating the 175th milestone beginning with events in January 2023, with significant events planned on and near Founder’s Day 2023 (October 11, 2023). 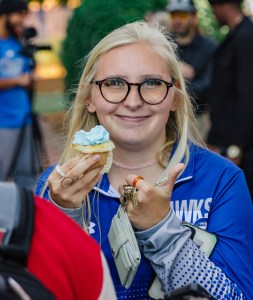 Delicious cupcakes – complete with “Chowan Blue” icing – were a popular treat at the Founder’s Day celebration. Photo by Chowan University

In the spring of 1848, a group of fathers gathered at the home of Dr. Moore, moderator of the Chowan Baptist Association. These men were determined to have an institution that would give their daughters a well-rounded education, and they presented a resolution to the Association.

The Association appointed the first trustees for the “female high school” to be called Chowan Female Institute. Dr. Archibald McDowell of South Carolina was elected first principal, and the Institute opened on October 11, 1848 with eleven students. Thus began the institution that has had major impact on the lives of thousands of persons over more than 170 years.

The institution overcame gloomy prospects in its early years to survive the challenges of the Civil War years. During 1897-1914 the Institute was transformed into a standard Senior College. It was renamed Chowan College in 1910, and first admitted male students in 1931. Due to financial pressures, the College changed from four-year to two-year status in 1937. The World War II years saw the closure of Chowan College. After being closed six years Chowan College reopened in 1949 as a two-year coeducational institution.

In 1992, Chowan College returned to four-year status and has now developed a solid reputation for academic quality and leadership in the cultural and religious life of eastern North Carolina and Virginia. In September 2006 the name of the institution was changed to Chowan University.

Historically, the University has played a significant role in Graphic Communication and the arts. As a university, a strong reputation has been built in areas such as the preparation of teachers, biologists and historians. In 2010 the university began offering a Master of Education degree in elementary education.

Although there have been many changes over the years, Chowan University remains closely related to the Baptist State Convention of North Carolina. It is the second oldest of North Carolina’s five Baptist colleges.

The University holds in high esteem its commitment to intellectual, social, and spiritual growth. The administration and faculty believe in and insist upon intellectual freedom, while continuing the commitment to Christian principles.