MURFREESBORO – Chowan earned a volleyball sweep against their rival Barton for the first time since the 2009 season with a victory here Wednesday evening in Conference Carolinas play. 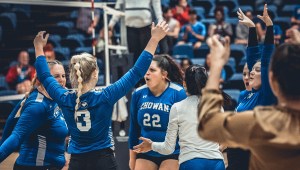 Barton opened the scoring in the first set with a kill before the Hawks rattled off the next six points. Middleton and Baskin teamed up for a block before Middleton collected a service ace. Rosa-Martinez added a solo block. Madison Hall and Putnam registered kills for the Hawks to extend the lead to 9-3.

Chowan pushed their lead to 14-6 on a pair of Middleton kills. Diana Rodriguez posted a service ace before a kill by Rosa-Martinez and Putnam added a kill. Middleton finished off the set with a trio of kills.

Both teams traded points early in the second set as Rosa-Martinez posted a kill followed by a Sydney Ginaitt service ace and a block by Nyah Powers and Putnam to put the Hawks up 6-4. Putnam picked up a kill and a block prior to the Bulldogs evening the score at 8-all.

Barton tried to take control of the set with small runs, but the Hawks answered after trailing 18-16 with a 9-0 run. Rosa-Martinez sparked the run with a kill followed by a block by Powers and a service ace by Hadley Prince. Middleton collected a kill and a block before Prince’s service ace took the set 25-18.

Once again, both teams would be separated by no more than a couple points in the early stages of the third set until a block by Hall shifted the momentum. Rosa-Martinez posted a block followed by a pair of kills by Baskin that forced a timeout by Barton with the Hawks leading 16-12.

Hall continued the momentum with a kill along with a pair of kills by Rosa-Martinez and a service ace by Prince pushed the score forward, 20-15. Middleton collected a pair of kills before a kill by Hall and Putnam ended the match.