RALEIGH – Ronald G. Baker, Sr., a former attorney at a law firm in Ahoskie, has been awarded the John B. McMillan Distinguished Service Award by The North Carolina State Bar.

The State Bar is the agency that governs the practice of law in this state. 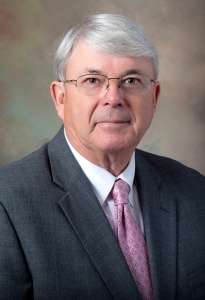 Everett Thompson, North Carolina State Bar councilor from the First Judicial District, was in attendance and presented a history of Baker’s professional career.

Baker is a past director and President of the North Carolina Association of Defense Attorneys, a past State Representative of the Defense Research Institute, and a past member of the Chief Justice’s Commission on Professionalism. He has served on the University of North Carolina Law School Alumni Association Board of Directors.

Formally of Ahoskie, Baker served that community in various capacities. He is a past president and life member of the Ahoskie Jaycees. He is also a United States Jaycees Ambassador.

Baker was elected to serve Hertford County as a county commissioner. He also served the student population in that county on the Board of Education for 12 years. He served as past director and President of the Hertford County Committee of 100.

Before moving to Kill Devil Hills in 2013, he practiced law for 35 years with the firm of Baker, Jenkins and Jones, PA as a civil trial attorney. Currently, Baker practices personal injury law with the firm of Sharp, Graham, Baker and Varnell, LLP in Kitty Hawk.

Baker is a 1967 graduate of Ahoskie High School. He attended the University of North Carolina as a Morehead Scholar, graduating in 1971 with a degree in Business Administration. He attended the University of North Carolina Law School, graduating with a Juris Doctor with Honors in 1975. While in law school, Baker was the Solicitor of the school’s Honor Court. He was also a member of the Order of the Coif and a staff member of the Law Review. He served as a research assistant for the Superior Court Judges Conference Committee that drafted the North Carolina Pattern Jury Instructions.