(Editor’s Note: This is the first in a series of columns about members of the Board of Trustees at Roanoke-Chowan Community College.)

AHOSKIE – Wendy Ruffin-Barnes has served as a trustee on the Roanoke-Chowan Community College Board of Trustees for over 22 years. She served as board chairperson for 12 of those years.

Ruffin-Barnes has contributed to the work of the college and its success while working full-time as an insurance agent, and owning and operating her own business, State Farm Insurance Agency in Ahoskie. At the same time, she is a wife, mother of a successful daughter, and a grandmother. 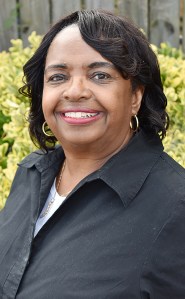 It’s not surprising she makes success look easy. She had a strong role model in her mother, Audrey Ruffin, who ran her own beauty salon before she went to work at Choanoke Area Development Association (CADA) assisting community members with housing needs and offering self-development classes in the community.

“She was an inspiration to me,” says Ruffin-Barnes. “My mother was proactive in establishing community buildings in Aulander and Roxobel, helped establish nutrition programs in schools, and took so many students on bus trips to show them other parts of the state and country. She tried to ‘blend’ the community and help students who could not afford things like band instruments.”

Saying her mother’s car was always so full of clothing and items for the community that they had to take her father’s car when they went on trips, Ruffin-Barnes credits both of her parents, now deceased, as being instrumental in her achievement of educational goals. They instilled in her that ‘it doesn’t matter where you come from, it’s where you’re going’.”

A graduate of the University of North Carolina at Chapel Hill and now a devoted alumna, she gets back to Chapel Hill frequently, especially to Carolina games.

“I have learned in life that if you are marginalized (from a poorer, rural area for example), people will underestimate you because they have no expectations that you will be successful,” states the trustee and businesswoman. “I always say don’t write my story for me because I get to write my own story. I encourage young people to take advantage of people underestimating you and use that as leverage”

After UNC at Chapel Hill, she became an insurance agent working in Virginia until she returned home to help care for her mother in her later years. She moved to Ahoskie and started her own insurance agency.

As a board trustee, she worked closely with staff to establish a male mentoring program at R-CCC that received a national award several years ago. She traveled to Florida with the president of the college and staff at that time to accept the award for outstanding engagement and completion rates of the participants.

“I believe our college is on the right track,” says Ruffin-Barnes. “We need vocational curricula such as the ‘Weld to Work’ program and truck driver’s certification. These certifications lead to family-sustaining incomes that help our economy including the tax base.”

Exemplifying the same community action shown by her mother, Ruffin-Barnes believes we need to strengthen our community and provide education and jobs so that people will not leave the area.

A member of the Sandy Branch Baptist Church in Roxobel, she is also a member of the Alpha Kappa Alpha (AKA) sorority and supports their community initiatives.

A golfer, she also loves to travel. Most recently she and her husband, Roy, a retired Commander in the Navy, took a cruise around the British Isles and visited Ireland.

“I love what I do,” she states. “Whether I am working as college trustee, insurance agent, or serving in the community, I get to help other people, and that is what is most fulfilling to me!”

As an inspirational trustee with a ‘can-do’ sense of helping others, Wendy Ruffin-Barnes is helping to write the story of Roanoke-Chowan Community College.