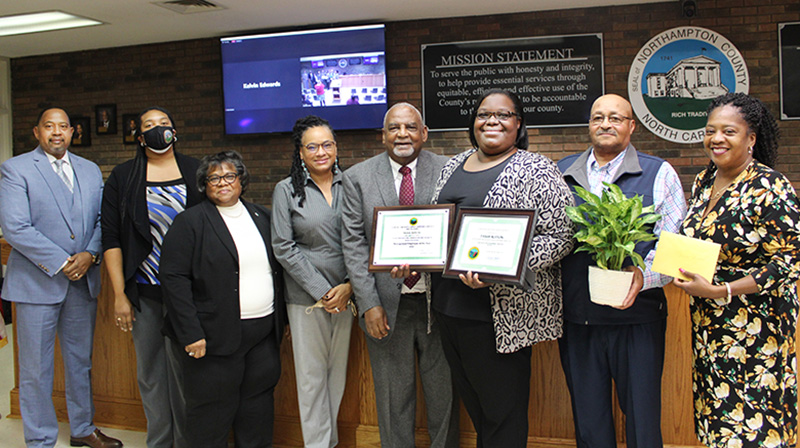 Tasha Alston (third from right) holds the certificates that honored her as the North Carolina Child Support Services Manager of the Year. She was recognized locally at a recent meeting of the Northampton Commissioners. Also pictured from left are County Manager Julian Phillips, County Commissioners Nicole Boone, Joyce Buffaloe, Geneva Faulkner and Charles Tyner along with DSS Board Chair Stephen Jackson and DSS Director Rhonda Taylor. Staff Photo by Holly Taylor

JACKSON – Tasha Alston, an employee of Northampton County’s Department of Social Services (DSS), has garnered some statewide recognition for her hard work.

Alston was selected as the 2022 North Carolina Child Support Services Manager of the Year, which was announced at the annual conference held in August in Cherokee, NC.

Northampton DSS Director Rhonda Taylor shared the good news with the county’s Board of Commissioners at their regularly scheduled meeting on Oct. 3.

“This is the first time in history someone from Northampton County’s Child Support Unit has won the award,” Taylor noted.

Alston was nominated by the DSS Attorney Luther Culpepper.

“North Carolina Child Support Services recognizes Tasha Alston for her dedication to the children of our state through the pursuit of excellence,” Taylor read in part from the nomination certificate and award plaque that Alston received.

Taylor explained that Alston, as the supervisor over the county’s child support division, works hard with her staff to make sure the children get what they need and any issues get resolved in a timely manner.

“Thank you for a job well done,” said Board of Commissioners Chair Charles Tyner after the presentation.