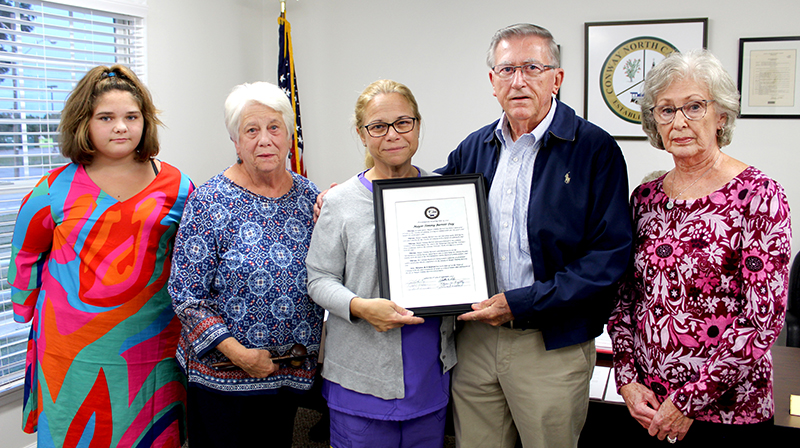 Valerie Pearce and Joe Barrett, respectively the daughter and brother of the late Tommy Barrett, jointly hold a proclamation honoring the Town of Conway’s former Mayor. Other family members pictured at the Oct. 4 meeting of the Conway Commissioners are, from left, Presley Pearce, Martha Barrett, and Ellen Barrett. Staff Photo by Holly Taylor

CONWAY – Members of Tommy Barrett’s family were recognized at Conway’s Board of Commissioners’ meeting on Tuesday, Oct. 4.

Barrett served as Conway’s mayor until his death in June. He had held the position since he was first elected in 2015. Before that, he also served two years as a town commissioner.

Walter Lee Duke, Jr., who was selected in July from the town’s board of commissioners to fill out Barrett’s remaining term as mayor, read a proclamation at Tuesday’s meeting in honor of the late mayor.

Duke noted that Barrett also devoted much of his time to the town’s volunteer fire department, and always helped organize the annual Memorial Day and Veterans Day ceremonies held at the Veterans Memorial Park on Main Street. Barrett himself was a veteran who served in the US Air Force from 1966 to 1970.

Barrett’s accomplishments in office included being able to turn over the vacant Conway/Severn Rescue Squad building for use by Northampton County’s EMS, a move that was made official with a ribbon-cutting celebration in 2021.

“The Conway Board of Commissioners expresses its profound appreciation and sincere condolences to the family of Mayor Tommy Barrett,” Duke continued.

He concluded the proclamation by stating that each June 14 in Conway will be set aside as a day of honor and celebration for the life of Tommy Barrett.

Members of Barrett’s family in attendance were his wife, Martha; his daughter, Valerie Pearce; his granddaughter, Presley Pearce; and his brother, Joe Barrett with wife, Ellen. His granddaughter Reese Pearce was unable to attend.

Martha Barrett, speaking through tears, thanked the town board and staff for all that they’ve done since he passed.

“I know Tommy’s smiling down [on us]. I do appreciate all the kindness you’ve shown our family,” she said.