AHOSKIE – As he stumps for votes within the 19 counties of the First Congressional District, Don Davis believes that the values instilled in him as a Greene County farmhand years ago will serve him well in Washington, DC. 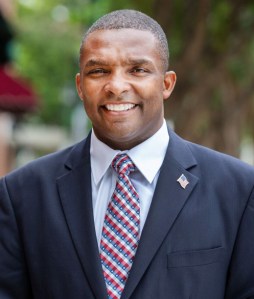 Raised in Snow Hill, he returned home after graduating from the US Air Force Academy, and his hometown residents elected him as its youngest mayor at age 29. For the past 12 years, Davis has represented Greene and Pitt counties in the North Carolina Senate. He now aspires to seek higher office, replacing the retiring U.S. Congressman G.K. Butterfield.

“From being a mayor, to a State Senator and now seeking to become a member of Congress, it still all boils down to doing commonsense things that make a difference in the lives of families,” Davis said during a recent visit to the office of Roanoke-Chowan Publications. “So much of what we do in the East is the same, so I will champion issues that impact us the most…healthcare, education, military veterans, and local government issues.

“If we are to realize our true potential in North Carolina, we cannot leave the eastern part of the state behind in that effort,” he maintained. “We have to make sure we give attention to eastern North Carolina.”

“I’m a living example of that,” he noted. “I came back home after my time in the Air Force. “This is such a great place to raise a family.”

Davis noted that North Carolina is one of the leading growth states in the nation, so much to the point that the state added a 14th congressional district.

“But if you look across the state, we here in the First [congressional] District were the only ones to significantly lose population,” he pointed out. “Seventeen of the 19 counties in our district lost population.

“I’m out in our district all the time, talking to students, talking to young professionals and this is what I hear: ‘I can’t wait to leave and I’m not coming back.’ Why would they say this? I believe it’s because of a lack of hope. The time is now to re-instill that hope. We have to work towards a stronger economy here in eastern North Carolina.”

To accomplish that latter statement, Davis said the message needs to be sent that “our business doors are open and we’re all about making sure that the infrastructure is in place to support those businesses, large and small.”

Part of that critical infrastructure, he said, is broadband accessibility.

“High-speed internet is an essential part of our daily lives, educationally and economically; we really saw that need during the COVID pandemic,” Davis said. “Having mobile hot spots isn’t a long-term solution.”

Davis also noted that within the 19 counties in the First District, 14 have schools that are classified as Title 1 institutions, meaning they are high poverty areas.

“We have to make sure that we are providing the necessary resources to these students,” he said. “We have to provide a pathway to higher education, preparing and training these students for the workforce to lift them out of poverty.”

Davis touted his efforts in the NC Senate to help build a new Brody School of Medicine at East Carolina University.

“We have an older population in the East,” he said. “And we have the highest health disparities of anywhere in the state, from infant mortality, to chronic health illnesses, to life expectancy.

“That leads to the fundamental question of how to deal with access to affordable healthcare,” Davis continued. “We do that in two ways. One, it’s imperative that we expand Medicaid in North Carolina…that not only helps people to live, it also has business implications with over 3,200 new jobs coming with that expansion. Number two is access to medical providers and convincing them to stay in the East once they graduate from medical school. The whole model about a new Brody School of Medicine isn’t just about a more modern facility, it’s also about possibly increasing the size of each class from 80 to 120 students each year. We can let those students know there is opportunity for them to establish a medical practice here once they graduate. If we can place them in a residency here and let them build a vested interest here, then they’re more likely to stay here.”

Davis said despite the multiple issues that eastern North Carolina residents and leaders deal with on a daily basis, he believes the future is bright.

“We just have to roll up our sleeves and go to work and we have to stand together in our fight to make eastern North Carolina a better place,” he stressed. “There’s real opportunity here.”

In closing, Davis said that there remains fundamental framework that must be strengthened in order for his vision for a brighter future to become a reality. He vowed to support farmers, military installations in the East, healthcare, education, and continue to work to build infrastructure.

“These are the main issues that I think about when I go to sleep at night and are the first things on my mind when I wake up in the morning,” Davis said. “What I’m hearing on the campaign trail is that this district wants someone not to go to DC to get into hyperpartisan ideological issues, but rather someone to go there and put the needs of this congressional district first and foremost. That’s why I’m running.”