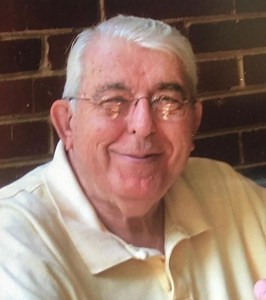 Edwin was the only child of the late Joseph Wilmer and Mabel Clair Woodard Barnes of Jackson, NC. After his mother died in 1942 and the subsequent illness of his father, he spent his teenage years at the home and farm of his uncle and aunt, Lloyd and Nina Mae Woodard Ricks of Conway, NC. His cousins, Elliot Lee Ricks, Foy Marie Ricks Taylor, Lawrence and Braxton Ricks, were as close to him as if they had been his brothers and sister.

Edwin was married to Bruce Gwendolyn Lassiter Barnes of Woodland, NC for 69 years after meeting on a blind date when she was 16 and he was 15. After six years of courtship, mostly by writing letters, they were married in 1951. They shared a beautiful love story all those years and were blessed with five children: Gwen (Walter) Abernethy of Stanley, NC, Tim (Karen) Barnes of Greensboro, NC, Malene (Randy) Goforth of Charlotte, NC, Cathy (Tim) McKane of Garner, NC, and Art (Susie) Barnes of Raleigh, NC. He was a loving Pawpaw to 11 grandchildren: Bryce, Anna, Lauren, Helen, Meredith, Emily, Caroline, Joseph, Bebe, Oakley, and Samantha, and 7 great-grandchildren: Adalyn, Coltin, Morgan, Shepherd, Henry, Wyatt, and Cameron and many nieces and nephews.

He graduated from UNC-Chapel Hill with a degree in Business Administration. He retired in 1990 after thirty-eight years of public service as a state employee; first, with the Department of Revenue, then with the Department of State Treasurer as an assistant director of the Local Government Commission. For the last 11 years of his public service, he was Deputy State Treasurer and Director of the State Retirement Systems Division for Teachers and North Carolina State Employees. In addition, he was a dedicated and steadfast volunteer with the State Employees Credit Union for 36 years.

Edwin was a long-time and devoted member of the Episcopal Church of the Good Shepherd, serving as a Sunday school teacher, youth advisor, treasurer, Endowment Fund trustee, vestryman, and both Junior and Senior Wardens. As an adult Boy Scout leader, he watched with pride as his two sons earned the rank of Eagle Scout. His grandson, Oakley Barnes is close to completing his requirements for the rank of Eagle Scout. He enjoyed woodworking and golfing. By default, he became the family historian for his Barnes and Woodard families and his wife’s, Lassiter and Vick families.

The family is very grateful for all the support of their many church friends, neighbors, and Transitions LifeCare staff of Raleigh. Our family also wants to extend a special thank you to Dr. James Parsons.

A memorial service celebrating the life of Edwin will be held in the Church of the Good Shepherd on Friday, September 30, 2022, at 11 a.m. with the entombment of his ashes in the Church columbarium. The family will receive friends and relatives immediately after the service. Those who wish to make a memorial in the remembrance of Edwin may do so to The Shepherds Table Soup Kitchen, Church of the Good Shepherd, 121 Hillsborough St., Raleigh, NC 27603, or Transitions LifeCare 250 Hospice Circle, Raleigh, NC 27607.