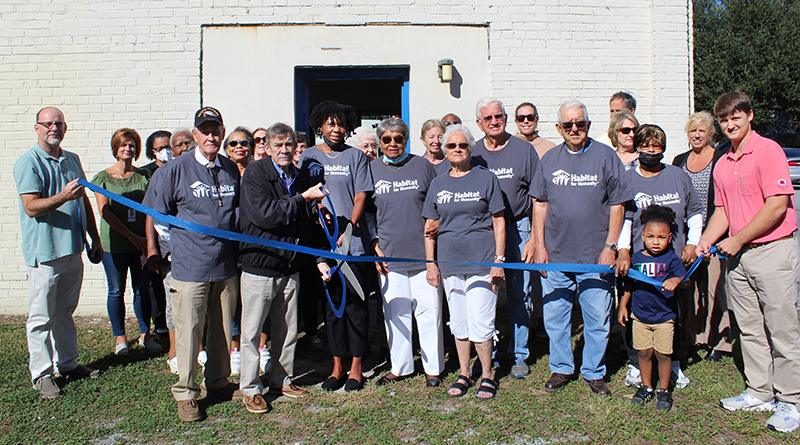 Murfreesboro Mayor Hal Thomas is joined by Hertford County Habitat for Humanity volunteers and others as he cuts the ceremonial ribbon on Sept. 23 to formally reopen the organization’s ReStore located on Main Street. Staff Photo by Holly Taylor

MURFREESBORO – After closing for more than two years due to the pandemic and then renovations, the Hertford County Habitat for Humanity ReStore is ready for a ‘restart.’

A ribbon cutting celebration to mark the reopening was held on Friday, Sept. 23 at the store, located at 117 West Main Street, Murfreesboro. The town’s Chamber of Commerce sponsored the event. 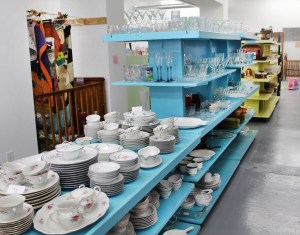 The shelves at the Habitat for Humanity’s ReStore are fully stocked with a wide variety of household items on sale at reasonable prices. Staff Photo by Holly Taylor

The ReStore is a way for the local Habitat for Humanity chapter to raise money for future housing construction. Joyce Hutchinson, who works as the store manager along with her husband James, explained that the store takes donations of household goods, and then resells those goods for at reasonable prices. The money from the store goes towards the costs of building houses for the local community.

“All of us are volunteers,” Hutchinson emphasized. “Nobody is paid. Never has been since it started.”

Alice Sharpe, along with help from the late Dr. Hargus Taylor, started up the Hertford County affiliate of Habitat for Humanity back in 1989. Sharpe was inspired after attending a workshop featuring the organization’s founder and hearing about the work they were doing to provide housing for those in need. She knew Hertford County didn’t have the resources of bigger cities like Charlotte, for example, where they were building 10 houses a week at the time.

“When you hear something like that, you can’t get it out of your mind,” she said.

Even if they couldn’t construct that many houses at once, maybe they could just do a few. And that would be better than none at all.

“That’s how we got started,” Sharpe recalled.

The organization did a variety of fundraisers initially, but as the years passed, they decided to open the ReStore as a way to generate more income.

“We want to thank everyone that prayed for us. Everyone that donated something. Everyone that volunteered,” Sharpe said to the crowd of people who gathered for Friday’s ribbon cutting reopening. “If we can continue to help Murfreesboro grow and Murfreesboro will help us to grow, that’s what it’s all about.”

The store temporarily closed during the pandemic, but remained closed longer for some much-needed renovations. Hutchinson explained that the big hail storm which hit Murfreesboro in 2019 had left damage to the building’s roof. Over time, they had to deal with more and more leaks that caused problems with the ceiling. Moisture damage also wreaked havoc on what they still had in the store at the time.

“We just got rid of everything in here,” Hutchinson explained.

The group then focused on cleaning up and fixing up the space. Once it was presentable again, they started accepting donations to restock the store.

Now the building is filled with a variety of household goods ranging from large pieces of furniture and home appliances to small kitchen dishes and children’s toys. Shelves are lined with books and picture frames. Outdoor flags dangle on a line at the end of one aisle. Seasonal decorations brighten up the windows at the front of the store.

Hutchinson said the only things they aren’t able to accept as donations are clothes, old TVs, mattresses, and cribs.

But donations aren’t the only thing the Hertford County Habitat for Humanity organization is looking for these days. Both Sharpe and Hutchinson said more volunteers are always needed.

Rev. William Reid, a volunteer who also serves as a board member for the organization, said many of the volunteers are getting older, but they still enjoy serving. As a Christian organization, he noted that the credit for their successes over the years goes to God.

“It’s such a joy to be working for Jesus,” Reid said.

Anyone interested in volunteering can visit the ReStore and talk to Joyce or James Hutchinson to learn more.

Many local business owners and residents attended Friday’s ribbon cutting event to show their support for the organization. Mayor Hal Thomas welcomed the store back to town as they officially cut the ribbon, and then visitors quickly began browsing the shelves afterwards, looking for items that caught their eye.

The store is open from 9 a.m. to 5 p.m. every Thursday, Friday, and Saturday. Donation drop-offs are welcome until 3 p.m. on those days as well.

For more information, call the ReStore at 252-396-0696 or visit their Facebook page “Habitat for Humanity of Hertford County.” 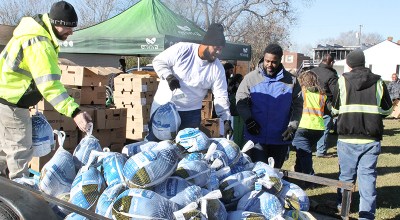 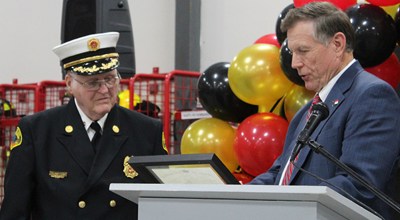