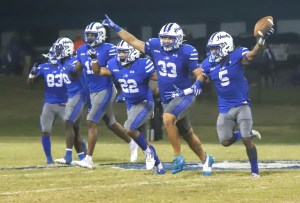 Jakob Streeter (#5) and Bernico Perofeta (#33) are joined by other Chowan defenders as they celebrate one of the four turnovers they collected during Saturday’s 21-7 win at home vs. Winston-Salem State University. Photo by Quiwania Miller

On the offensive side of the ball, true freshman Caleb Pierce got his second straight start at quarterback and completed 17-of-26 passes for 187 yards and one touchdown. Nijere Peoples led the Hawks ground game, rushing for 58 yards on 17 carries. He also scored a touchdown.

Jake Ray led the receivers with four catches for 38 yards and a touchdown.

After a scoreless first quarter, Winston-Salem State saw a 21-play drive end early in the second period where they missed a 43-yard field goal attempt.

On the game’s ensuing possession, Jordaan Bailey started the Hawks in the right direction with a 33-yard scamper around the left end. The Hawks would push into the redzone before a holding call stalled the drive and Chowan settled for a 41-yard field goal attempt. WSSU’s defense would block the kick to keep the game scoreless. 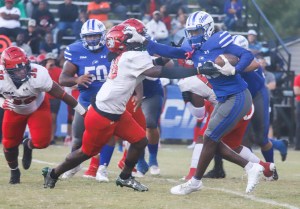 After three straight run plays that netted six yards, Winston-Salem State set up to punt away their next possession. The snap sailed over the punter’s head and into the endzone. The WSSU punter tried to kick it out of the back of the endzone for a safety but missed, allowing Streeter to fall on the loose ball for the touchdown to put the Hawks on the board 7-0 with 4:03 remaining until halftime.

The next drive for the Rams ended with an interception by Burns over the middle, giving the Hawks the ball at the WSSU 40 with 2:30 remaining.

Pierce started the ensuing drive with a pass to Demetrius Moore for a first down. Pierce would connect with Tyrek McNeil for a 27-yard completion before finding Ray on the goalline for the score to put the Hawks up 14-0 at the intermission.

Neither team mustered a score in the third period.

Chowan’s defense would set-up the Hawks final touchdown when Burns sniffed out a screen play and picked off the pass that he returned seven yards to the Rams 44 yardline.

The Hawks started off the drive with a completion to Justin Anderson over the middle for a first down. Peoples rumbled his way to a first down with a 10 yard carry. Pierce found Moore for a 16-yard completion that set up a one-yard touchdown run by Peoples to put the Hawks up 21-0. 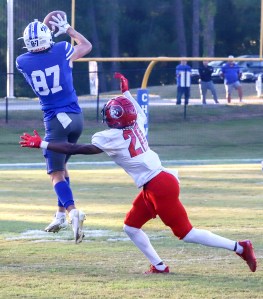 On the ensuing kick-off, Patric Talbot used an “excuse me” kick that bounced off a WSSU player and was recovered by Streeter at the CU 47. The Hawks weren’t able to capitalize on the field position turning the ball over on downs.

The Rams made a change at quarterback, inserting freshman Jahmier Slade. He promptly orchestrated a 10-pay, 70-yard drive capped by a great diving catch in the endzone by R.J. Mobley as WSSU avoided the shutout by scoring with 3:12 left in the game.

Chowan (2-2 overall and 2-0 in league play) will take their modest two game win streak on the road for the first time this season when they travel to take on defending CIAA Southern Division Champs, Fayetteville State, on Saturday, Oct. 1. Kick-off is slated for 7 pm.