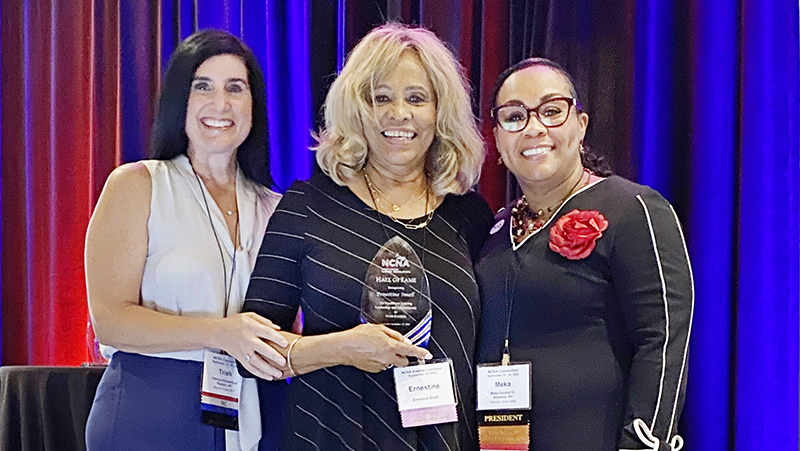 RALEIGH – A native of the Roanoke-Chowan area, hailed as a “trailblazer” long before that term became popular, is now a member of the prestigious North Carolina Nurses Association’s (NCNA) Hall of Fame.

Dr. Ernestine Small, the daughter of a Northampton County sharecropper who later became the first Black person elected president of the NCNA, was inducted into the Hall of Fame as part of the organization’s 115th annual convention held Sept. 15-16 in Raleigh.

“I thank you for this honor; I am deeply appreciative of it. This is my Emmy moment,” Small said after being introduced at the convention’s awards luncheon. “One of the pinnacles of my professional life and my personal life was being elected president [of the NCNA]. “I don’t know how many of you out there were a part of that era, but we had a great time.”

She shared just how badly she wanted to serve in the capacity of NCNA president.

“I went to every hotel room and put a small circle on the door that said ‘Elect Ernestine Small’,” she recalled of the 1979 NCNA Convention.

“I sang to ya’ll,” Small recalled as she invited a few of her nursing colleagues on stage for an impromptu performance of “The Gambler” by the late Kenny Rogers.

She thanked her now late parents, Rufus and Velia Brown, for their love and support.

“I never doubted that they wanted me to have a life better than theirs and they did what they could to equip me to be on my own and make a contribution to society,” Small stressed.

“I’m now in the season of my life where I’m beginning to reflect did I, am I making a difference,” Small added. “This induction into the Hall of Fame gives me that affirmation.”

Small’s path from the rich soil of her native Northampton County to the NCNA Hall of Fame could easily provide the script of a made-for-TV movie.

She had already exhausted all of the local educational opportunities afforded to her by age 16. She enrolled in the BSN program at Tuskegee Institute, where she excelled. From there, she launched an unprecedented career full of noteworthy examples of breaking new ground.

Being “first” – several times over – is just one of the reasons NCNA chose to honor Dr. Small. Her track record of leadership is also undeniable. She was an essential part of NCNA’s successful lobbying efforts at the General Assembly in 1981, including the push to define the scopes of practice for LPNs and RNs and the mandate that the majority of Board of Nursing members be elected by fellow nurses.

After an illustrious tenure at UNC-G, Dr. Small went on to serve as the Dean of multiple schools of nursing, including North Carolina Central University and Winston-Salem State University, before spearheading a diversity program at UNC-Chapel Hill.

Nearly 500 registered nurses from across the state attended the annual convention. The event primarily provides an opportunity for professional development, continuing education, and networking, while also serving as a chance to honor nurses and those outside the profession who have made significant impacts on healthcare.

“It seems like every time we get together it gets better. This year, the energy is so high; the engagement, the enthusiasm. It fills my cup meeting new people, seeing them network and connect,” said NCNA President Meka Douthit EL. “This is the place where we advocate for education, practice, policy, and so much more. There is something for everybody.”

During the awards luncheon, the NCNA also named seven award winners, and celebrated the graduation of its 10th Leadership Academy.

This year’s convention focused heavily on the state of healthcare in 2022. While society at-large has moved past the coronavirus pandemic, nurses are struggling with serious workforce shortages, burnout, and increasing violence/abuse at the workplace. NCNA’s Statewide Membership Forum, which is designed to help guide the association’s priorities, was dedicated entirely to workplace violence and verbal abuse. Attendees considered the impact these issues have had on their workplace and ways that NCNA can help support a comprehensive culture of safety and zero-tolerance to abuse and violence in healthcare settings.

“Over the past few years, these issues have been getting worse and our members have increasingly been sounding the alarm,” NCNA CEO Tina Gordon said. “Nurses need to be heard and they need to know they’re not alone with their concerns, and I’m glad NCNA was able to support our members by giving them a platform on this incredibly important topic. This conversation gave us critical input we can take to our partners in healthcare systems, at the regulatory level, and in the North Carolina General Assembly to better address these issues.”