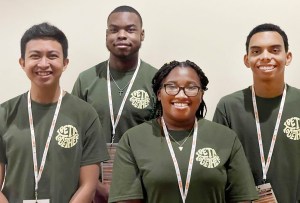 The participants were Marc Joel Cepe Lequin, the son of Joel Quirante and Julia Lequin, of Ahoskie; Christian Smith, the grandson of Wallace and Susan Jordan of Murfreesboro; Melanie Rodgers, the daughter of Nicole Fennell of Aulander and Oris Hall, Jr. of Winton; and James Brown, the son of James and Rhonda Brown of Gatesville.

The Senior Beta co-sponsor Kenyatta Moore-Ward stated, “I am elated that children from Northeastern NC are just as prepared as students from around the nation. You would have to be present to see the excitement on their faces as they exited the competition. I am reassured that we can do anything we set our minds to, and teamwork is paramount in our living and successes.”

Co-sponsor Pamela Scott added, “It amazed me how intelligent and confident our early college students were. Prior to the competition, they did not seem nervous nor intimidated. Their success was indicative of the knowledge, experience, and exposure they gained during their four years at HCECHS.”

Lyndsay Burns Britt, ECHS principal stated, “The BETA students at ECHS have worked hard to compete and win National titles over the past several years. They are a true representation of the Beta Pillars: service, character, leadership, and achievement. I continue to be impressed by the talents of the youth that attend ECHS and know we will continue to see great success in the future.”

These Beta students will truly be missed, for they have begun their first semesters at UNC Chapel Hill (Marc and James), Elon University (Melanie), and the North Carolina A & T State University (Christian).