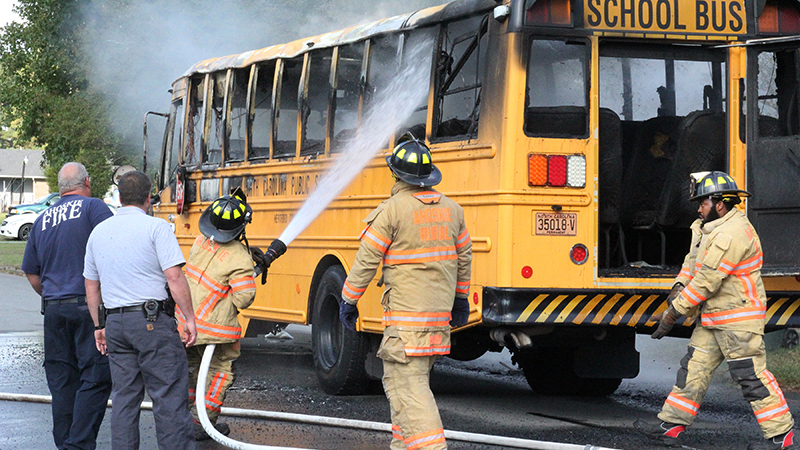 Ahoskie firefighters extinguish one of the final “hot spots” in the wake of Wednesday’s incident that gutted a bus operated by Hertford County Public Schools. The cause of the fire is under investigation. Staff Photo by Cal Bryant

AHOSKIE – Hertford County Public School officials are praising the quick action by one of their bus drivers as well as a prompt response by local fire and police personnel after a bus caught on fire here Wednesday afternoon. 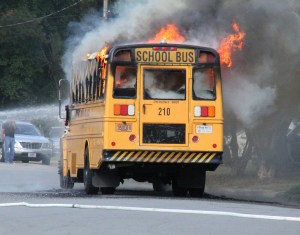 Smoke and flames spill from the bus after it caught fire on North Maple Street in Ahoskie. The driver and four students escaped without injury. Staff Photo by Cal Bryant

No one was injured when the fire broke out on HCPS Bus #210 shortly after 4 pm as it was transporting elementary school-aged students to their homes.

The incident occurred on North Maple Street, in the block between Alton and Rogers streets. At that time there were four students on the bus along with the driver, Kendra Tann.

“Ms. Tann’s quick analysis of the situation and her priority of safety for her passengers led to quick action resulting in a safe evacuation for all students and our driver,” stated Brunet Parker, the Public Information Officer for Hertford County Public Schools. “As a result of this well executed evacuation, there were no injuries or need for medical attention for any individuals who were on the bus.”

“In addition to our driver and students’ efforts, other responders played a key role in quickly extinguishing the fire and ensuring that proper actions were taken,” Parker stated. “We appreciate all of the individuals who responded: Transportation and Maintenance Department employees, local fire and rescue, and our school administrators.”

Parker told the Roanoke-Chowan News-Herald that all HCPS bus drivers are required to participate in an orientation session prior to the start of each school year. She said part of that orientation involves training on how to safely evacuate students off the bus.

“I realize that during school hours our parents and community trust us with one of our most precious gifts, our children,” noted Tammi Ward, Interim Superintendent of Hertford County Public Schools. “Incidents of this type are unfortunate and our Transportation Department, along with state and bus vendor personnel, began yesterday evening (Wednesday) and will continue to analyze the cause.”